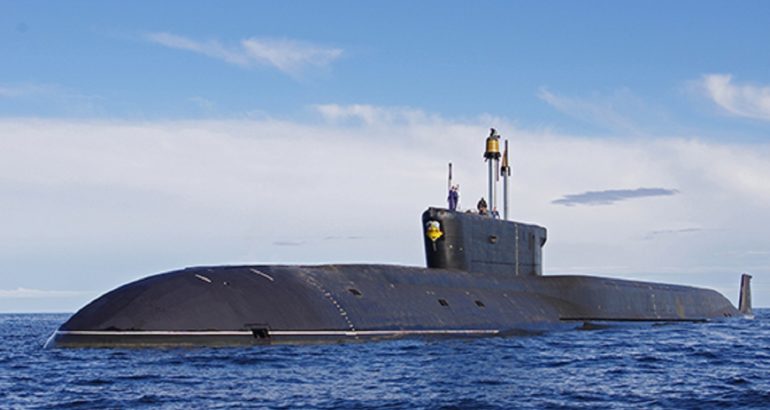 K-550 Alexander Nevsky is the second Borei-class ballistic missile submarine of the Project 955 in service with the Russian Navy. Russian MoD picture

The project to build a series of eight SSBN was reported in May 2018 when a defense industry source disclosed a decision to build another six submarines of project 955A at Sevmash Shipyard.

The name of the seventh SSBN is unknown. Experts believe the Field Marshal Kutuzov is most suitable as the Generalissimo Suvorov submarine is already being built. Besides, the Mikhail Kutuzov cruiser of project 68-b is already an exhibit of the Navy museum. Minin should not be forgotten, as the fifth submarine of the series has been named after his comrade-in-arms Pozharsky. As for Zhukov and Rokossovsky, there are no doubts that future Russian warships will be named after WW2 victors.

There is an opinion that the Soviet Navy unevenly distributed SSBN and the Northern fleet enjoyed an advantage. However, it did not always happen. For example, submarines of the two latest modifications of project 667 were distributed between the Northern and the Pacific fleets in a close to 1/1 proportion — 7 BDRM and 4 BDR in the North and 10 BDR in the Far East. At present, the Northern fleet considerably overtakes the Pacific fleet in SSBN strength — 7 against 3. It will be eight against three when the Knyaz Vladimir becomes operational. The potential adversary has eight SSBN in the Western (Pacific) direction and six in the Eastern direction.

There are reasons for preferential SSBN deployment in the North. Experts Ilyin and Kolesnikov write in the Russian Submarines book that “strategic submarines have an absolutely complete survivability (due to unfavorable hydrology for the adversary in vast shallow waters) during patrol of the Arctic seas close to the Russian coast.”

The Arctic ice is 350/450 miles away from Gadzhievo submarine base in winter/spring and less than five days of navigation at maximum noiseless speed of 20 knots (four times longer from Vilyuchinsk). It promotes covert deployment. Open sources said a munition capable of breaking through the ice and ensuring a missile launch was being designed.

Open sources provide no hydrology data of the Sea of Okhotsk, however its geographic location is more advantageous than the Barents Sea. Gadzhievo is located a hundred kilometers from the Norwegian border and the entrance to the Polar areas is open for NATO warships despite Russian control. The Sea of Okhotsk is de jure no inland sea, but de facto it is (for SSBN deployment). The deployment in Kamchatka of submarine brigades of projects 636.3 or 677 and project 20380 and 20385 corvettes will reduce the possibility for Japanese and US submarines to penetrate the sea to the minimum. The distance from the Northern and Pacific fleets to adversary targets is actually the same.

It means each of the fleets has to have the same Borey strength. It is necessary to urgently reinforce the Pacific fleet to eliminate the imbalance. The Navy decided to send three project 955A submarines to the Far East — the Knyaz Oleg, the Generalissimo Suvorov and the Emperor Alexander III. The Ryurik will go next. Thus, the “nuclear parity” between the Northern and Pacific fleets in the 6×6 format (after scrapping all project 667BDRM SSBN) demands to build another two SSBN of project 955A, expert Alexander Shishkin writes in his blog.