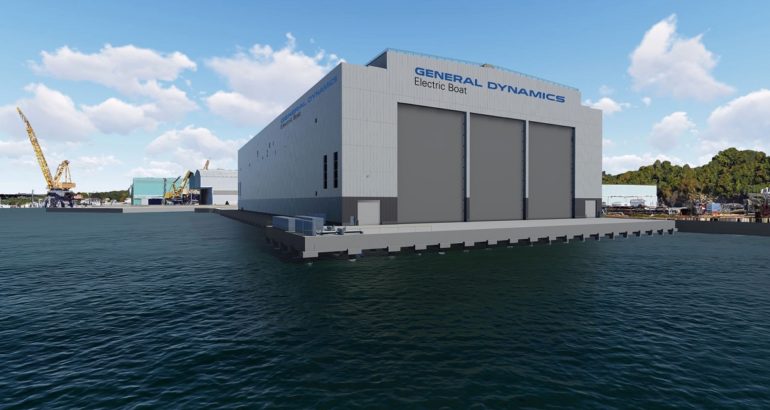 Future site of the GDEB South Yard Assembly building. The 200,000 square foot building dedicated to the construction of the Columbia class of ballistic missile submarines, expected to be complete in 2023.

General Dynamics Electric Boat (GDEB) announced that it had signed a contract to begin the next phase of construction on a facility to support construction of the U.S. Navy's future class of ballistic-missile submarines (SSBN), the Columbia-class.

The company signed a $544 million contract with AECOM of Los Angeles, California, to complete the construction of the South Yard Assembly Building (SYAB), the centerpiece of the biggest facility expansion in 50 years at the company’s Groton shipyard.

In September 2019 the company broke ground on the SYAB, a 200,000 square-foot building that will eventually be home to 1,400 skilled shipbuilders who will deliver the Columbia class to the U.S. Navy. Electric Boat is also expanding and modernizing other manufacturing spaces in Groton and building a floating dry dock.

Electric Boat is the prime contractor on the design and build of the 12 ships of the Columbia class, which will replace the aging Ohio-class of ballistic-missile submarines. Early construction began in 2017 at the company’s facility in Quonset Point, Rhode Island. Final assembly and test of the Columbia class will take place starting in 2024 at Electric Boat’s shipyard in Groton.

“General Dynamics Electric Boat continues to make investments – in facilities, in our supply chain and in the next generation of shipbuilders – to support the Columbia class, the Navy’s top strategic priority. Efficient completion of the SYAB will position us to begin delivering the next-generation of ballistic submarines in advance of the Ohio-class retiring from service.”

The South Yard Assembly Building is part of an overall $1.7 billion investment the company is making in modernizing and upgrading its facilities to meet the expanded needs of the Navy.

The company has hired and trained thousands of new employees and has worked with its national network of suppliers to prepare for the estimated 150% increase in the need for supplies and materials to concurrently build the Columbia and Virginia classes.

The Columbia-class will replace the existing Ohio-class nuclear ballistic submarine force, which entered service in the 1980s. The future submarines will be 170 m long and 13 in diameter, and should have 16 missile launch tubes instead of 24 missile launch tubes on Ohio-class submarines. 12 Columbia-class SSBNs will help the U.S. Navy maintain a credible, survivable and modern sea-based strategic deterrent into the 2080s.

The Columbia-class is a critical shipbuilding program and must deliver on time to meet U.S. Strategic Command nuclear deterrence requirements due to the Ohio-class submarines reaching maximum extended service life. The first Columbia-class ship is on track to begin construction of USS Columbia (SSBN 826) in fiscal year 2021, deliver in fiscal year 2028, and on patrol in 2031.

The life-extended missiles – Trident II (D5LE) – are now being deployed to the Fleet and will serve for the remaining service life of U.S Ohio-class and as the initial loadout for the U.S. Columbia-class SSBNs.

Our video interview on the Columbia-class during SAS 2019: