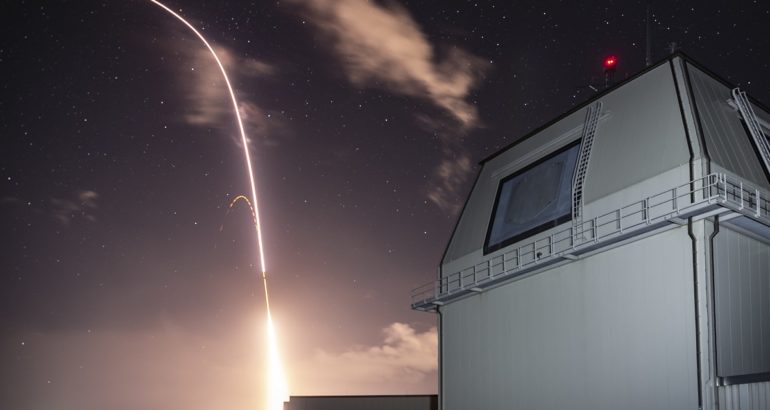 Following the recent stop to the Aegis Ashore missile defense system deployment in Japan, Prime Minister Shinzō Abe's party is looking at possible alternatives. Options include additional Aegis destroyers, armed mega floats and even offensive conventional strike capability. Yoshihiro Inaba has the details and explains why the third option would be a major change for Japan's defense policy.

The Liberal Democratic Party (LDP) has set up a working team to examine Japan’s future missile defense system in the wake of the suspension of the Aegis Ashore deployment process.

As an alternative plan to deploying Aegis Ashore in Akita and Yamaguchi prefectures which has already been suspended, the working team is considering the construction of additional Aegis ships for the JMSDF and the installation of vertical launching system (VLS) on mega-floats.

However, the JMSDF has expressed difficulties in building additional Aegis ships. On June 16, 2020, JMSDF Chief of Staff Hiroshi Yamamura pointed out at a press conference that the Aegis ship needs a lot of crew (for example the JMSDF latest destroyers, the Maya-class, have a crew complement of about 300 sailors) and recruitment for the additional crew would be a problem. Yamamura also made it clear that a system like Aegis Ashore is needed for year-round continuous (24/7, 365 days per year) ballistic missile defense (BMD) because operations of Aegis ships are dependent on the weather condition and other multiple factors.

In addition, the JMSDF wants to send Aegis ships to the East China Sea and the Pacific Ocean in response to China’s growing maritime expansion, and the constant deployment of Aegis ships in the Sea of Japan has become a major burden for them.

As for the “mega-float” option, it also comes with limitations. They are very large pontoon-type floating structures. Mega-Floats are vulnerable to sabotage by frogmen and torpedo attacks due to their offshore location, so defending against them requires a lot of money and effort. Therefore, Gen Nakatani, a former defense minister and member of the LDP’s working team, has proposed deploying Aegis Ashore at two existing JASDF radar sites (the service has 28 such radar facilities across the country), according to Reuters. He also suggests separating the VLS from the radar sites. Aegis Ashore radar and VLS remotely don’t have to be placed at the exact same location. For example, at the Aegis Ashore site on the island of Kauai, Hawaii, the radar and VLS are located several kilometers apart from each other.

The LDP working team is also considering giving offensive capabilities, or so-called “conventional strike capabilities” to the JSDF. This is due to North Korea’s advances in ballistic missile technology and China’s deployment of hypersonic glide vehicle (HGV). In particular, HGV is difficult to intercept with existing BMD assets, and it is now believed that addressing this will require not only improved BMD capabilities, but also the ability to destroy the threat on the ground before it is launched. This is a major change in Japan’s defense policy, as Japanese BMD have been described in the past as a response to the threat of North Korea, not China.

The conventional strike capabilities itself, if realized, would be an equally significant change to Japan’s defense policy. Traditionally, Japan has placed significant restrictions on the capabilities that the JSDF can possess due to the constraints of Article 9 of its Constitution. Article 9 prohibits the threat or use of force in the paragraph 1 and prohibits the possession of war potential such as the Army, Navy and Air Force in the paragraph 2. However, because Japan is a sovereign nation, it retains an inherent right of self-defense and the possession of minimum armed forces to exercise that right is considered constitutional.

The question is whether or not the conventional strike capabilities fall within the minimum framework. Traditionally, the Japanese government has explained that ICBMs, long-range strategic bombers, attack aircraft carriers, and other weapons that cause catastrophic damage to enemy territory are beyond the minimum framework. However, if Japan is exposed to an attack by a ballistic missile or other means, and no other suitable means exist to destroy this launcher or anything else related to it, it is constitutional to attack it in enemy territory. For this reason, it has been argued that conventional strike capabilities are constitutional and do not conflict with Japan’s basic policy of so-called “exclusively defense-oriented policy (専守防衛)”. One point that must be emphasized is that this is not a “pre-emptive” or “preventive” self-defense under international law, which has been condemned by the international community, but a so-called “interceptive” self-defense that is fully consistent with Article 51 of the UN Charter.

In the past, the Japanese government has been very clear that it is basically dependent on the U.S. military for strike capabilities and that the JSDF will not have these capabilities, in consideration of other countries to ensure that Japan is not seen as aggressive. As a result, the JSDF has not possessed the equipment necessary for a conventional strike, such as long-range missiles, Suppression of Enemy Air Defense (SEAD) capabilities and adequate ISR capabilities. However, the JASDF’s upcoming introduction of nearly 150 F-35A/B, and the refurbishment of the JMSDF’s Izumo class DDH will change these situations dramatically. The F-35 is equipped with very capable sensors such as the AN/APG-81 active electronically scanned array (AESA) radar and the AN/AAQ-37 Distributed Aperture System (DAS). The target information captured by these sensors is transmitted undetected to friendly forces via Multifunction Advanced Data Link (MADL). Then, another F-35 with target information acquired by MADLs, as well as DDGs/CGs at sea and long-range missiles on the ground, would be able to hit the target. In fact, the U.S. Pacific Fleet had demonstrated a concept called “up-gunned expeditionary strike group” (ESG) in the Indo-Pacific region. The concept is to operate the F-35B as a forward sensor, firing cruise and anti-aircraft missiles at targets captured by it. And also once the Izumo class is able to operate the F-35B, it will allow it to continue to operate within the theater through refueling and reloading its armament at sea.

As I have already mentioned, under the U.S.-Japan alliance, Japan has relied on the United States for its strike capabilities. And Japan has been playing the role of a shield. But the situation has changed. Now, Japan is facing a number of multiple missile threats. Sticking to a purely defensive policy will be tougher from a budgetary standpoint. So it is natural that Japan itself would consider having strike capabilities. We need to recognize that this is not an aggressive trend, but rather one that will evolve the U.S.-Japan alliance and enhance peace and stability of this region.