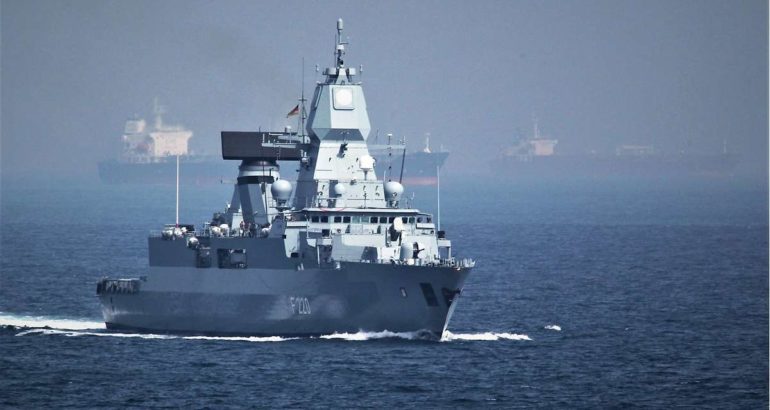 The air defense frigate will join the Irini operation for close to 5 months. The German Navy is contributing to the operation since its beginning with P-3C Orion Maritime Patrol Aircraft. On May 7, the Bundestag mandated the participation of its own armed forces in the EU-European Union mission.

The Sachsen-class frigate is the first ship of the German Navy to take part in the mission. According to the Deutsche Marine, the main task of the ship and the crew is to implement the arms embargo against Libya imposed by the United Nations Security Council.

“We are facing an assignment that will pose new challenges for the ship and her crew in several ways. The Frigate ‘Hamburg’ will certainly have to do pioneering work here and there on a difficult political and operational terrain, ”

The frigate is deploying with two helicopters and a VBSS team.

In addition to monitoring the United Nations arms embargo, Operation Irini – and therefore the German frigate – also has the task of collecting information about the illegal export of oil and petroleum products from Libya and helping to build up the Libyan coast guard and navy. It will also play an important role in this effort to prevent the business model of smugglers and traffickers in the central Mediterranean.

As we reported, Hamburg was set to take part in a missile live-fire exercise off the Norwegian coast and then continue on a five-month training mission with stops in Reunion Island (France) and then all the way to Australia. However this was postponed because of the current global health crisis.

The German Navy has a total of three Sachsen-class F124 frigates. They are designed as multi-purpose vessels for escort, protection and maritime control. Its focus is on air defense: With its SMART-L radar, a single vessel class can, for example, monitor the airspace over the entire North Sea. The radar of the Sachsen-class is able to detect more than 1,000 targets at the same time.

Sachsen-class frigates are fitted with 32x Mk41 VLS for SM-2 and ESSM missiles and two RAM launchers. The can also deploy Harpoon anti-ship missiles and torpedoes.