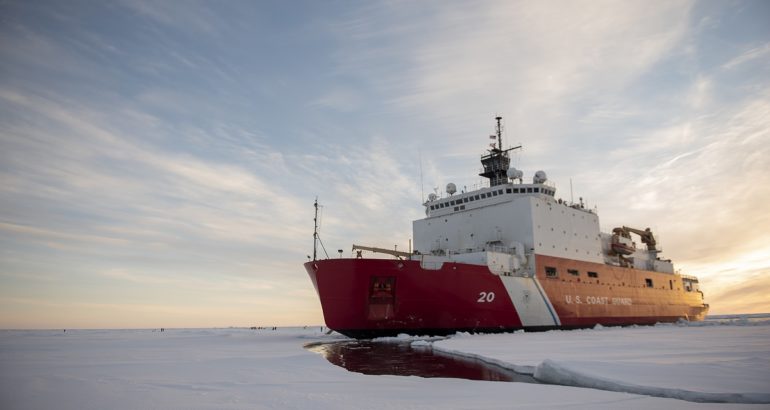 ARCTIC OCEAN – The U.S. Coast Guard Cutter Healy (WAGB-20) is in the ice Wednesday, Oct. 3, 2018, about 715 miles north of Barrow, Alaska, in the Arctic. The Healy is in the Arctic with a team of about 30 scientists and engineers aboard deploying sensors and autonomous submarines to study stratified ocean dynamics and how environmental factors affect the water below the ice surface for the Office of Naval Research. The Healy, which is homeported in Seattle, is one of two ice breakers in U.S. service and is the only military ship dedicated to conducting research in the Arctic. (NyxoLyno Cangemi/U.S. Coast Guard)

The U.S. Coast Guard Cutter Healy (WAGB-20) suffered a fire in one of the ship’s main propulsion motors Aug. 18 while underway for operations in the Arctic.

No injuries were reported.

The Healy was 60 nautical miles off of Seward, Alaska, en route to the Arctic when an electrical fire was reported at 9:30 p.m.  A fire team disconnected the affected motor, and the fire was confirmed extinguished by 9:56 p.m.  The cause of the fire is currently unknown.

The propulsion motors are critical equipment that use the power generated by the ship’s main diesel engines to spin the shaft and propeller. This design protects the engines from variations in shaft speeds inherent to ice operations.

Due to the fire, Healy’s starboard propulsion motor and shaft are no longer operational, and the ship is transiting back to its homeport in Seattle for further inspection and repairs.

Prior to the fire, the Healy completed a 26-day patrol in support of Operation Arctic Shield, demonstrating U.S. presence and influence in the Bering Sea, along the U.S.-Russian Maritime Boundary Line, and in the Arctic.

On Aug. 15, the Healy was in Seward and embarked 11 scientists before departing on Aug. 18 to ensure national security and conduct science operations in the Arctic.  As a result of the fire, all Arctic operations have been cancelled.

“I commend the crew of the Healy for their quick actions to safely combat the fire. This casualty, however, means that the United States is limited in icebreaking capability until the Healy can be repaired, and it highlights the nation’s critical need for Polar Security Cutters.”

For the record, another U.S. Coast Guard Cutter, the Polar Star (WAGB-10) experienced major mechanical issues that placed the icebreaker and crew in serious jeopardy during a voyage south to Antarctica last year.