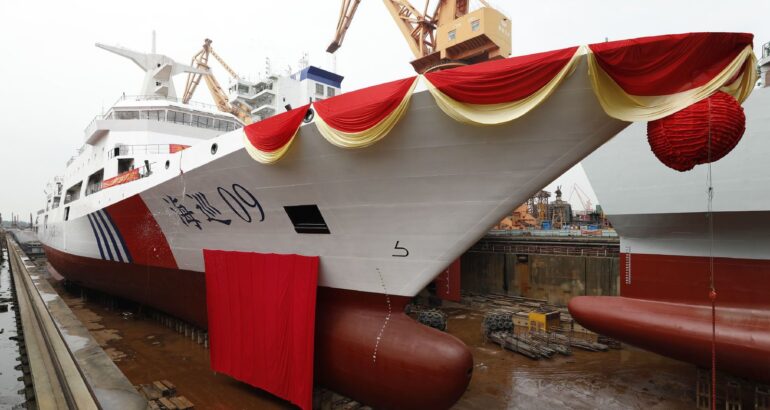 The Haixun (pennant number 09) was built at the Guangzhou Wenchong Shipyard of the China State Shipbuilding Corp. and is set to enter service next year. Construction of the vessel began in May 2019.

The ship has a helicopter deck and a data center with several sets of satellite communication systems, including China’s Beidou satellite navigation system.

The Haixun is expected to serve as an important platform for law enforcement, emergency coordination and command, as well as pollution prevention, the administration said in a statement.

The vessel has an intelligent engine room system capable of real-time monitoring of the main propulsion system and generator sets. The vessel also uses low sulfur fuel and has a system to remove nitrogen oxides, often found in engine exhaust gases.

“Haixun will help strengthen maritime traffic control and emergency support, ensure safe and smooth shipping and protect the country’s maritime interests. It will also be an important tool for emergency management and cooperation in the global maritime security sector. The plans also call for the expansion of the maritime patrol fleet capable of long-range operations on the high seas by leveraging technological innovation.”

China’s MSA is a government agency which administers all matters related to maritime and shipping safety, including the supervision of maritime traffic safety and security, prevention of pollution from ships, inspection of ships and offshore facilities, navigational safety measures (including Search and Rescue, Aids to Navigation and the Global Maritime Distress and Safety System), administrative management of port operations, and law enforcement on matters of maritime safety law.

The MSA’s 25,000 officials, other working staff, operate a patrol force of 1,300 vessels and watercraft of various types, including three maritime security patrol vessels in service with a displacement of over 3,000 tons.