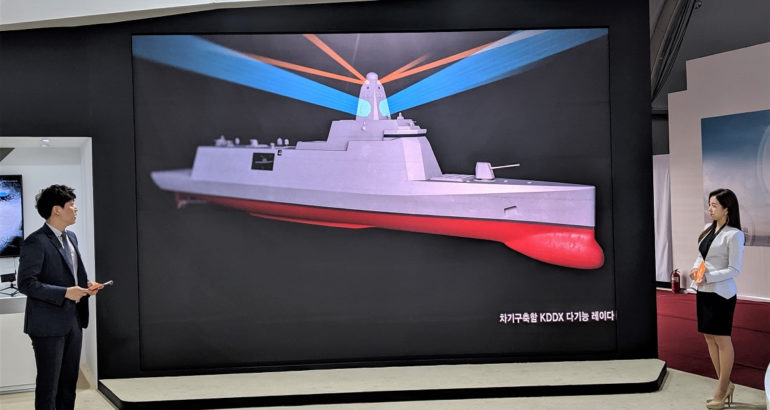 South Korea's Hanwha Systems has been chosen as the preferred bidder for the KDDX Combat Management System (CMS) and Multi-Function Radar (MFR) developments and production. KDDX is the Republic of Korea (ROK) Navy next generation destroyer program.

Hanwha Systems announced on September 16th that it was selected as the final preferred negotiator for KDDX’s Combat System (CMS) and Multifunctional Radar (MFR) Development’ project. The scale of the business is about 670 billion won, accounting for about 60% of Hanwha Systems’ defense division sales in the previous year.

According to the company’s press release, the combat system is a strategic weapon system for integrated operation of various sensors, armament, and other communication and command systems fitted on a ship, and is a core system that acts as the ship’s brain.

The combat system to be installed aboard the KDDX destroyer will perform the role of command and control of ships’ weapons in simultaneous combat situations such as anti-air warfare (AAW), anti-surface warfare (ASuW), electronic warfare (EW), and land attack. It will integrate, link, and analyze resources such as sensors and armaments based on a network, and will be equipped with real-time tactical information processing technology and multiple data links to control various guns and guided missiles.

The company added that the integrated mast (I-MAST), a new concept sensor system that improves the stealth capability of ships, includes detection sensors such as dual-band multi-function phase array radar, infrared detection and tracking equipment (IRST), and identifier (IFF), and communication devices such as VHF/UHF. The antennas flat and all fitted on a single mast.

Hanwha Systems has been studying the possibility of applying integrated masts for the past 10 years and securing stealth design technology. It has developed and installed Korea’s first complex sensor mast (MFR+IRST integration) and the world’s first 100% digital multi-functional active phase array radar in a four-sided fixed type on the Ulsan-class FFX Batch-III which currently being tested.

The X-Band radar is the same radar as the AESA radar of the recently unveiled Korean fighter (KF-X). In addition, Hanwha Systems already has expertise in simultaneous S-band and X-band radar operation, the core technology of ‘dual-band multi-function radar’ and the ability to develop full digital transmission and reception block (DTRB) technology.

The KDDX, which will be developed based on these technologies, is expected to have improved survivability and maximized combat capability thanks to two area of focus:

“I feel a great sense of responsibility and mission to participate in the development project of the next destroyer where pure domestic technology is thorough and in a context where the competition for military power is more intense than ever before. We will do our best to create a destroyer with the best advanced brain beyond the Aegis ship with the technology accumulated through the development of radar.”

For the record, Hanwha Systems has been supplying combat management systems to more than 80 ships, including ships and submarines of the ROK Navy for nearly 40 years, and exported the combat management system for the Philippine Navy Jose Rizal class frigates in 2019. Recently, the Korean fighter (KF-X) AESA radar prototype was rolled out by Hanwha, proving unrivaled competitiveness in both the combat system and radar sectors.

The KDDX is the first Korean destroyer to be made with domestic technology, including key weapon systems such as the hull, combat system, and multi-functional radar. It is called a 6,000-ton class’mini Aegis ship’, and the total business scale is 7.80 trillion won, and a total of 6 ships are expected to be built over the next 10 years.

South Korea’s two main shipbuilders, Hyundai Heavy Industries (HHI) and Daewoo Shipbuilding & Marine Engineering (DSME), are competing for the KDDX program, each with their own design.

Local media reports claimed in mid-August that HHI had won the contract. The information was not confirmed by official sources at the time. The latest Korean media reports suggest that the outcome of the bidding process may be decided in court: According to Seoul Broadcasting System (SBS) and other outlets, an investigation is underway in military court and at the Ulsan District Prosecutors’ Office over alleged leaks of documents and collusion between Navy officers and HHI employees. Meanwhile it appears that HHI’s KDDX design came out on top with a difference of 0.056 points out of 100 points.

Contacted by Naval News, a Korean defense industry source said that the final decision on the KDDX design win is now expected by year-end.