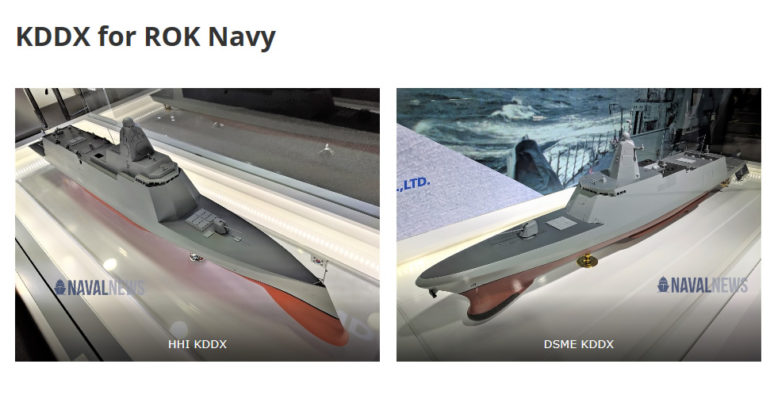 South Korea's Defense Acquisition Program Administration (DAPA) started on May 29 the competitive bidding process for the next generation destroyer of the Republic of Korea (ROK) Navy known as "Korea Next-Generation Destroyer" or KDDX.

According to the DAPA website, companies have until July 20 to submit their bid. South Korea’s two main shipbuilders, Hyundai Heavy Industries (HHI) and Daewoo Shipbuilding & Marine Engineering (DSME), are competing, each with their own design.

HHI unveiled is KDDX design at MADEX 2019 defense show held last year in Busan. HHI’s KDDX is 156 meters in length with a beam of 19 meters and a displacement of 6,500 tons. As far as weapon systems are concerned, HHI told us the design is fitted with 8x anti-ship missiles, 48x K-VLS forward and 16x K-VLS II aft. On top of the helicopter hangar is a next generation CIWS for which funding as just been approved. The crew complement will be between 160 to 180 sailors.

HHI studied three bow types (conventional bow, hi-bow, wave piercing/inverted bow), compared the benefits and compromises of each and found that the third option (inverted bow, similar to DDG 1000 of the U.S. Navy or the future FDI frigate of the French Navy) offered the best advantages.

For sensor systems, KDDX will feature a new generation integrated mast. Naval News learned during MADEX 2019, HHI has entered a partnership with Hanwha Systems and their ship design show Hanwha’s I-Mast. HHI’s competitor for KDDX, DSME is negotiating with LIG Nex1 for a similar type of partnership (see below).

[VIDEO] Learn more about Hanwha’s I-MAST in our video interview at MADEX 2019 at this link.

According to HHI, the other major sensor innovation of the KDDX is the integrated sonar system: It is a next generation ASW system combining a hull mounted sonar and a towed array sonar.

HHI announced this week that it is pushing for full-scale development of ‘Korean Future destroyers’ by:

The workshop was attended by about 40 experts in design and research in the field of ships, including Nam Sang-hoon, head of HHI’s Special Ship Business Division, Ju Se-don, head of POSCO’s Steel Solutions Research Institute, Eo Sung-chul, head of Hanwha System’s defense division, and Song Kang-hyun, head of the Korea Shipboard Research Institute.

The results of joint research undertaken over the past year were presented during this workshop:

The results of research on new technologies including the new material field, the stealth field, and the high-tech ship field, were also presented.

“We have greatly expanded our core manpower for the development of the latest ships, and we have successfully developed a Korean-style surface combatant by successfully consolidating Hyundai Heavy Industries’ experience in designing ships and the capabilities of domestic defense companies and research institutes.”

[VIDEO] Check out our video interview with HHI on the KDDX project at this link.

In its baseline configuration, DSME’s KDDX has a length of 155 meters, a beam of 18 meters and a draft of 9.5 meters for a displacement of 8,000 tons. It features 48x VLS cells forward, 16x VLS cells aft, 16x anti-ship missiles and 2x K-DAGAIE NG decoy launchers.

As previously explained (during our coverage of MADEX 2019), DSME has already signed a number of contracts with the ROK Navy in previous years:

LIG Nex1 and DSME were negotiating a partnership for the integration of LIG’s integrated mast (Hanwha being partnered with HHI). We were told during MADEX 2019 that this potential partnership will be non binding and that DSME remains open to work and integrate Hanwha’s I-MAST should the ROK Navy make this choice.

DSME announced in early May that it completed a preliminary study to apply its new electric propulsion system technology to “next-generation high-tech vessels”, including the KDDX. The Korea Electric Research Institute, Seoul National University and the Korean Register of Shipping also took part in this research project along side DSME.

In a more recent statement, the South Korean shipbuilder announced that it “is taking the lead in developing smart technologies that will be applied to the next-generation high-tech vessels of the Republic of Korea Navy”. A “smart ship technology council” was helf to share research results with experts in smart ship technology from the Navy, industry, academia and government-funded research institutes and accelerate technology development. The technical council was joined by the Navy’s Future Innovation Research Group, Korea University, Korea Institute of Machinery (KIMM), Korea Shipboard (KR), SK Telecom, LIG Nex1, Hanwha System, GE, Marine Electronics, and Inoshimulation to share research results in each field. The newly announced smart technology will be applied to the South Korean Navy’s first smart ship, the KDDX, which will serve as a key force in the Navy Vision 2045.

“DSME will lead the development of smart vessels that can win the future battlefield environment by forming an industry-academic alliance and one team with a sense of responsibility as a ship system company,”

[VIDEO] Check out our video interview with DSME on the KDDX project at this link.

The South Korean government approved on April 27, 2020, the program for the development of a new combat management system (CMS) for the KDDX. The announcement was made on the Defense Acquisition Program Administration (DAPA) website, along with two other programs (one for “Korean Joint tactical data link” and the other for “Tactical Information and Communication System”). The program will span over a period of 10 years (2020 to 2030) and has been allocated a budget of about 670 billion South Korean won (about 550 millions USD).

Two local companies, LIG Nex1 and Hanwha Systems (the same one as for the I-MAST) are set to compete for this development program. Both companies have experience and a proven track record of CMS (software) and CIC (hardware) development and production, both for domestic and export vessels. For example, Hanwha Systems developed and produced the CMS and CIC consoles for the FFX Batch I, II and III Frigates as well as the KSS III submarines of the ROK Navy. On the export fron, Hanwha System supplies the CMS for the BRP Jose Rizal class of the Philippine Navy. LIG Nex1 just completed the upgrade of the ROK Navy KSS I CMS (PIP program) and successfully exported its Naval Shield Combat Management System to Indonesia (upgrade aboard existing Type 209 submarines).

During MADEX 2019, LIG Nex1 unveiled its CIC and CMS proposal for the future KDDX destroyer of the ROK Navy. The future Combat Information Center (CIC) and its Combat Management System (CMS) were being showcased to select VIPs, behind closed doors, on the LIG Nex1 booth during the show. Naval News got a special clearance to access this room and we even got to film it. Unfortunately we didn’t get access to a similar room on the Hanwha Systems booth, therefore we can not comment on Hanwha’s solution.

LIG Nex1’s CIC of the future features a large room with a 360° video wall. The truly unique feature of this CIC is the tactical table: It will be able to display true holograms (as in 3D hologram) without the use of smoke or vertical screen. LIG Nex1 told us that this tactical table will be using “light field display” holographic technology currently being fine tuned by their technology partner (and consumer electronics giant) LG. Light field displays use a microlens array to split an image into individual light rays. Using adequate encoding of the image shown, the display can create a light field directly in front of the viewer’s eyes, who can then focus on the various depths of a scene. 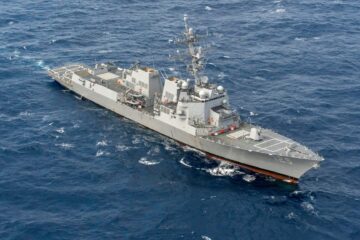