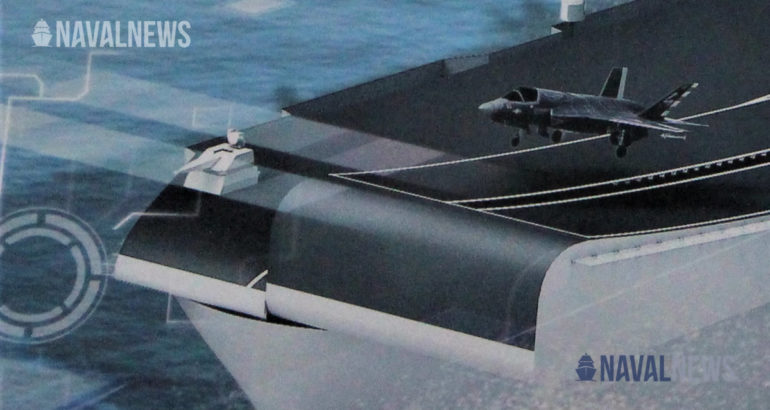 CIWS-II fitted aboard the LPH-II project, the future aircraft carrier of the ROK Navy. (Detailed view of Hyundai Heavy Industries poster on display during MADEX 2019)

South Korea's Defense Acquisition Program Administration (DAPA) has approved the development of a new close in weapon system for the Republic of Korea (ROK) Navy. Known as the CIWS-II program, the new system will defend ROK Navy surface vessels against anti-ship missiles and fast attack craft.

Martin Manaranche contributed to this story

According to an official statement issued on May 26, the allocated budget for the CIWS-II program is ₩350 billion ($282 million) and the program time line (from development to mass production) is expected to span over 9 years (2021 to 2030). Preliminary research and development have already by late 2019.

Two South Korean defense companies, Hanwha Systems and LIG Nex1 have shown interest in participating in the project. According to DAPA, CIWS-II will follow modern trend in using Ku-band tracking radar and FLIR.

Existing CIWS of the ROK Navy

To date, the ROK Navy is using three kinds of CIWS systems (one with short range missiles, two with 30mm Gatling guns):

Thales doesn’t produce the Goalkeeper anymore (but continues its maintenance and upgrade, including for the ROK Navy in partnership with LIG Nex1), the Phalanx is considered as too expensive and the RAM is getting replaced by a vertical launch missile, the K-SAAM by LIG Nex1 which can be quad-packed. This prompted South Korea to develop its own CIWS.

The CIWS-II is set to provide short range protection of the FFX-Batch III, the KDDX and the future aircraft carrier of the ROK Navy (LPH-II program). Naval News saw scale models or artist impressions of these three ship classes fitted with a “notional” CIWS-II during MADEX 2019 defense show held in Busan, in October 2019 (see illustrations of this article).

Talking to Naval News during MADEX 2019, a Hanwha Systems representative explained that in the preliminary R&D phase, all options were being considered for the new CIWS:

Based on the various scale models and artist impressions at the show, it doesn’t look like that CIWS-II will be based on laser or a Gatling gun, leaving one option: The 40mm gun system. Note that this wasn’t confirmed by Hanwha in any way. However, interestingly and for the record, it appears that South Korea already adopted this technology (case telescoped gun) for the future the future KAAV II amphibious assault vehicle of the ROK Marine Corps.

As we reported during ADEX 2019 (Seoul Air Show), the KAAV II will feature an unmanned turret with a 40mm case telescoped (CT) canon. According to Hanwha Defense, this canon is under development by local company S&T and will deploy a future cased telescoped ammunition by South Korean company Poongsan (see below). In the case of the CIWS-II, the canon could still be supplied by S&T while the turrent and associated sensors would be designed by Hanwha or LigNex1

For the record, a 40mm case telescoped canon as a CIWS has been selected by the French defense procurement agency (DGA) to protect the future replenishment tankers of the French Navy (ships known as BRF). The official announcement of the selection of the “Naval RapidFire” (developed by Nexter and Thales) following a competitive tender should be made soon. To learn more about the Naval Rapidfire, check out our video below: