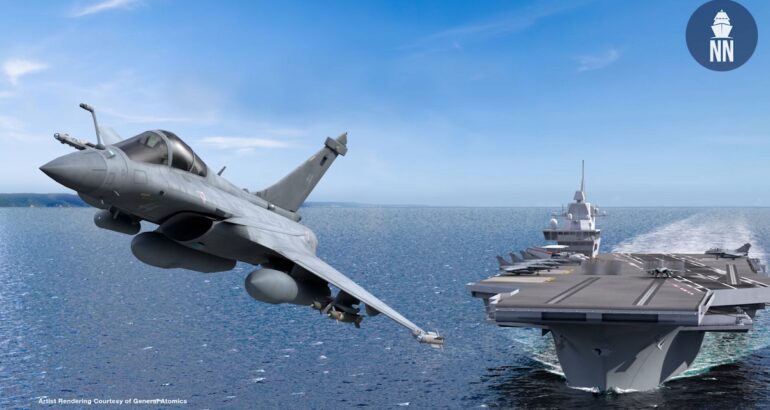 An official announcement on the French Navy's new generation aircraft carrier (PANG) program is expected to be made "soon" by French President Emmanuel Macron, probably by year-end.

During Euronaval 2020, French Armed Forces Minister Florence Parly confirmed that the PANG (Porte Avion Nouvelle Generation or new generation aircraft carrier) program will be launched in order to deliver a successor to the existing Charles de Gaulle aircraft carrier in 2038.

Regarding the new generation aircraft carrier, I confirm that this program will be launched to give a successor to Charles de Gaulle in 2038. This future aircraft carrier will federate the excellence of our naval industry in the coming decades and, through its strategic dimension, will offer an employment framework perfectly adapted from its conception to the future combat aircraft known as SCAF.

Right before Euronaval, in a hearing at the French Parliement, Parly made the following statement about the PANG program “In 2021 we plan to commit € 261 million to further studies. Decisions were set to be made in the summer. They have not been made yet. They will be by the end of this year. So we will be able to commit the appropriations as planned, I think, without difficulty” .

As we reported previously in our detailed feature about France’s future aircraft carrier, an official announcement was set to be made around Bastille day (July 14) by President Macron. The announcement however never came.

More recently, on 23 October, during a press conference, DGA General Delegate for Armaments Joël Barre answered a question on the PANG program with the following:

“We have completed the preliminary study of the aircraft carrier in recent weeks. So indeed it will be a little bigger than the Charles de Gaulle aircraft carrier simply because it will have to carry larger aircraft since the SCAF will be bigger than the Rafale. We have proposed this preliminary study for the decision of our political authorities and we are awaiting the corresponding decision to launch the development of this new generation aircraft carrier […] We must await the decisions of our highest authorities on this topic, I think they will be made soon. “

In a report on the 2021 French Navy budget issued on 21 October, Member of Parliament (MP) Didier Le Gac sheds some additional light on France’s next generation aircraft carrier.

The PANG will be one of the pillars of our post 2038 navy, the essential tool for the credibility of France as a great naval power.

For the record, the Minister of the armed forces launched the “new generation aircraft carrier” (PANG) program on October 31, 2018. The program was launched with the aim of guaranteeing the continuity of the “carrier strike group” capability by 2038 after the decommissioning of aircraft carrier Charles de Gaulle and in accordance with the guidelines set by the military planning law. According to Le Gac, this program is in its preparation phase which aims in particular to consolidate the military needs and define the characteristics of the project (function , performance, physical content, schedule, costs), capacity architecture or industrial organization. The first choices concerning its propulsion system will determine the implementation schedule and must be made from 2020. “In the coming weeks, the French President is set to speak on this subject” Le Gac explains in his report.

PANG: A strategic importance for the French Navy

According to Le Gac, the carrier strike group (CSG) is a powerful demonstration of French capabilities at sea. It has established itself for decades as an essential effector and a structuring capacity of the French navy. France is today one of the very few powers to master this discriminating tool, across the entire spectrum of air-sea and air-land missions. “The know-how and experience accumulated are precious and must be perpetuated so as not to risk a rapid downgrading of our navy. This new generation aircraft carrier project is therefore essential to allow our country to maintain its rank, both military and diplomatic”.

While the PANG program would follow a historic line of French aircraft carrier (Marine Nationale having just celebrated 100 years of carrier aviation), several factors were considered in the studies in order to inform future choices for the aircraft carrier design, including:

The methodological approach was resolutely open so as not to rule out any option, starting from an initially broad spectrum of options and concepts and then gradually converging on the most suitable solutions over the course of the studies.

According to MP Le Gac, for the moment, studies seem to retain a length of about 300 meters and a displacement of 70,000 tonnes, much more than the current Charles de Gaulle (261 meters long and displacing 42,000 tonnes). Compared to other vessels of this type in service, the PANG would be slightly larger than British aircraft carriers (65,000 tonnes) but still smaller compared to American vessels (100,000 tonnes). The option of an aircraft carrier with an angled deck, equipped with catapults (90 meters long compared to the 75 meters currently) and arresting wire, is preferred.

One thing is therefore certain: the new aircraft carrier will be larger than the current one. This is an imperative for the implementation of the air combat system of the future. The ship should also allow simultaneous catapulting and landing, which is not possible with the Charles de Gaulle.

The acquisition of a new aircraft carrier obviously aims to meet the needs of the French Navy and the armies which, as the French Navy Command explains, will be facing a likely increase in conflicts at sea. This worrying development was not foreseen – or at least not for such a short time – a few years ago. Therefore, defining the needs of the French Navy for the 2040s or 2050s is a major challenge. This challenge is all the greater as technological developments are rapid and so are our competitors. The new-generation aircraft carrier will, for example, have to be able to accommodate weapons of still undetermined dimensions, in particular drones which will likely experience new developments in the coming years.

One or two aircraft carriers ?

According to Le Gac, a tougher international context will no longer leave the choice of “when” to deploy the CSG to protect French interests. The question of returning to a “permanent” CSG capability, i.e. the ability to permanently have a CSG in operation or ready to deploy on short notice (within a week), will need to be answered in the years to come. “Indeed, if the choice to produce and field one or two aircraft carriers is not decisive at this stage of the project, it will have to be made in 2025” explains Le Gac.

SCAF/FCAS: The future fighter of the French Navy

The MP then gives an update on the SCAF/FCAS (Future Combat Air System). This system of systems project is led by the Air and Space Force Chief of Staff by delegation from the Chief of the Defense Staff. It can be seen as a “joint” program however because a French Navy officer acts as “Navy Assistant” to the General in charge of this project.

Regarding the progress of the project, Le Gac reports that the studies are still in a very conceptual phase. Some delays have already been reported due to the health crisis (Covid-19), the complexity of the industrial structure (3 co-contractors, 16 sub-contractors), and the integration of Spain later in the program. An ambitious 6-year contract must be signed in the first quarter of 2021, in order to allow a ramp-up of the research and technology studies that will be necessary for the future system, comprising a piloted aircraft and autonomous sensors linked by a network of resilient datalinks. This contract should result in the realization of “systems” concept demonstrations, which will not, however, be representative of operational aircraft and drones.

Under these conditions, the French Navy insists on the need to make all of these “systems” compatible with the capabilities of the carrier strike group which will be formed from 2038 around a new generation aircraft carrier (PANG). This therefore translates into compatibility of the PANG catapults and arresting wires, but also by the ability of some unmanned aerial vehicles (UAVs) to be deployed from combat vessels operating as an escort of the aircraft carrier.

Development studies of operational systems are expected between 2026 and 2030. By then it will be necessary to have finely defined the interface parameters with the naval environment.

EMALS and a dedicated landing spot for F-35B ?

Our new aircraft carrier will also have to meet the needs of the navy, with a level of efficiency at least equivalent to that of the Charles de Gaulle. I am thinking in particular of our interoperability with strategic allies, such as the US Navy. Choices will therefore have to be made, both technologically and strategically. We are now awaiting the decision of the President of the Republic, who should answer all these questions.

For interoperability alone, the electromagnetic catapult system (EMALS) appears to be the most suitable technological solution, compared to the steam catapult (the technology of which is set to disappear by the time the PANG is launched).

According to Le Gac, aboard PANG, interoperability with the US Navy will rely on the installation of EMALS and AAG identical to those fitted aboard the USS Ford (CVN 78). Regarding the Royal Navy and the navies equipped with F-35B short take off and vertical landing (STOVL) fighters, studies are underway to analyze the possibility of a dedicated landing spot for these aircraft aboard the PANG.

Talking to Naval News during Euronaval about France’s future aircraft carrier program known as PANG, the president of GA-EMS confirmed that EMALS were being considered following a study contract:

“We’ve been under a study contract for the last 18 months with the U.S. Navy customer supporting a variety of studies including EMALS and AAG on the potential French aircraft carrier […] we will continue to support the PANG program”

While the FY2019 Annual Report for the Office of the Director, Operational Test & Evaluation issued in December 2019 highlighted some reliability concerns with EMALS, the program has made good progress this year: USS Gerald R. Ford (CVN 78) with EMALS and AAG was able to launch and recover 167 aircraft launches and arrestments successfully in a single day, with a 100% safety record. As of today 4,491 catapult launches and landing arrestments using EMALS and AAG systems has been successfully and safely achieved aboard CVN 78.

Cost control is a major issue for the design of the new aircraft carrier argues Le Gac in his report. That is because of the tight budgetary context

The current military planning law (2019 to 2025) already provides 154 million euros for the new generation aircraft carrier. This budget will necessarily have to be increased, on the occasion of the planning law update in 2021 and the next planning law in 2025. During her hearing, the Minister of Armed Forces already announced that the government planned to commit 261 million euros in 2021 pending future decisions on the program.

The defense procurement agency (DGA) has started evaluating the amount to be covered, although this naturally depends on the options that will be chosen to complete the design of the PANG aircraft carrier.

All in all, the “educated guess” we made about the likely specifications and configuration of PANG in our previous feature on the topic still holds:

In the coming weeks we should get a few details on the “confirmed” specifications of France’s future aircraft carrier with President Macron’s official announcement… at last!

Martin Manaranche 15 Jun 2021
The French Air Force deployed an MQ-9 Reaper unmanned aerial vehicle (UAV) for maritime surveillance tasks as part of the European operation Irini - whose mission is to enforce the arms embargo on Libya - on June 5, 2021.