North Korea unveiled a new submarine-launched ballistic missile (SLBM) during the regime's latest military parade. The missile is the latest development in a series of Pukguksong SLBMs and is known as the "Pukguksong-5ㅅ".

Jeongmin Kim, Seoul Correspondent for nknews.org explained on Tweeter that South Korean navy chief said before that the consonant ‘ㅅ’ in Pukguksong names likely refers to ‘수상용,’ which means “for use in water.”

“The world’s most powerful weapon, submarine-launch ballistic missile, entered the square one after another, powerfully demonstrating the might of the revolutionary armed forces,”

The military parade was held for the five-yearly congress of the ruling Workers’ Party, during which North Korea’s leader Kim Jong Un decried the US as his country’s “foremost principal enemy”.

Pukguksong-5ㅅ is the latest in a family of North Korean SLBMs. The Pukguksong-4 was revealed last October and appeared to be smaller compared to the “5” variant:

The latest Pukguksong-5 (“북극성-5ㅅ”) could presumably be carried by the North Korean Navy’s ROMEO-MOD submarines (aka Sinpo-C). H I Sutton recently wrote a detailed report on this submarine, originally envisioned to deploy three Pukguksong-3 missile:

“The KN-26 Pukguksong-3 missile is taken seriously. In a successful test exactly a year ago on October 2 2019 it flew 450 km (280 miles). This may not sound very far in missile terms, but it reached 910 km (565 miles) in altitude. This in turn can be translated into a maximum range of at least 1,900 km (1,200 miles). Actual ranges may be even further. The missile’s name translates as Polaris-3, which may be a deliberate reference to the famous American missile. Like Polaris for the U.S. Navy, Pukguksong-3 may represent a coming of age for the North Korean Navy.” Submarine expert H I Sutton explained.

The latest Pukguksong-5 is expected to have better performances… but is, seemingly, much larger too. Will the ROMEO-MOD / Sinpo-C submarine be able to carry it ? Could this be the reason why the Hermit kingdom has plans for nuclear-powered submarines ?

At the 8th Congress of the Workers’ Party which started on 5th January 2021, Kim Jong Un revealed plans for North Korea to build a nuclear submarine, saying that the plans were almost complete… 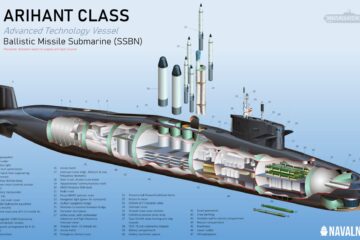