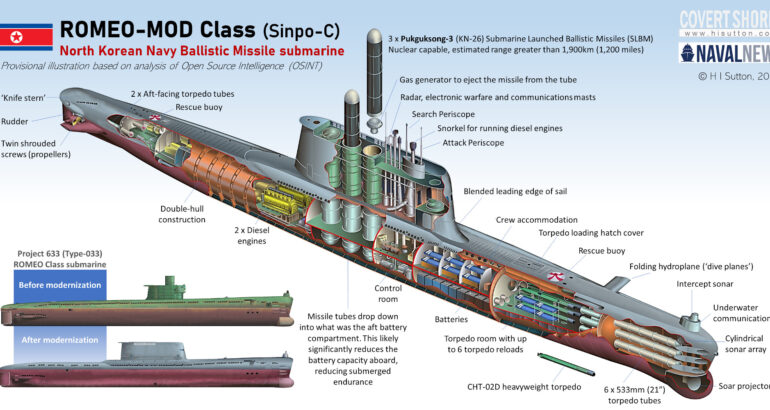 The Romeo-Mod submarine will carry three ballistic missiles in the sail, which is an unusual configuration today. Because it is a modification of the Romeo Class submarine, we can determine a lot about its internal layout

The World’s only operational conventionally powered ballistic missile submarine (SSB) may soon emerge in North Korea. The Romeo-Mod submarine, also known as Sinpo-C, was first revealed on North Korean TV on July 23 2019. It will likely be armed with three Pukguksong-3 missiles which are the hermit kingdom’s best performing. So it will, on paper, pose a serious threat to U.S. and allied targets in the region. But how real is the threat?

The missile’s name translates as Polaris-3, which may be a deliberate reference to the famous American missile. Like Polaris for the U.S. Navy, Pukguksong-3 may represent a coming of age for the North Korean Navy.

The submarine however, is actually not that new. Based on analysis of open sources it is a straightforward modification of the existing Romeo Class. This means that we can determine quite a lot about its internal layout and capabilities.

The North Korean Navy has a large fleet of around 20 Romeo Class submarines. It is a Russian design but some where built in China, and some locally. The modification sees three missile silos dropped in through an enlarged sail. The current ballistic missile submarine, the single Gorae Class (aka Sinpo-B), can only carry one missile.

While any submarine can be hard to find and pose a serious threat, the Soviet-era Romeo design is now over 60 years old. And the modernization process may have degraded its aging capabilities further. The placement of the missile tubes means that the battery capacity, which drives the submarine when it is submerged, may be almost halved. This will significantly reduce its submerged range.

Ankit Panda, the Stanton senior fellow at the Carnegie Endowment for International Peace, suggests that the submarine will likely not venture far anyway. “Allied Anti-submarine warfare (ASW) means they probably can’t treat the SSB as highly survivable if they go far out into the Sea of Japan.” Panda believes that “the concept of operations ultimately will be littoral: if the SSB deploys. It will likely stay in their claimed territorial sea”

Meanwhile the Pukguksong-3 missile has only been tested once. Analysts are now watching a North Korean naval base closely for tell-take signs that a second test is imminent. Some observers expect as test as early as this month. They are watching a small base at Sinpo where new types of submarines, and missiles, are tested. The Romeo-Mod submarine appears to be under construction there too.
So stepping back, the missile is credible yet the launch platform is inherently limited. So the whole North Korean may be as much about prestige as operational capabilities. But if so, it must come at a massive cost to the isolated country.

There are also concerns about the unpredictable role it could play in any future crisis. It is something of an unknown quality, for both sides. As Panda puts it, “there are serious questions about how well North Korea could exercise effective command and control over its sea-based force in a crisis”. But once it is at sea, the submarine cannot be ignored by adversaries. And perhaps that is the point.