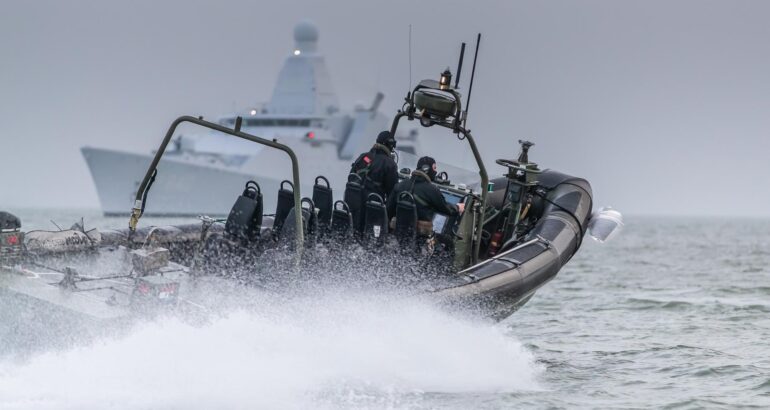 Dutch Defense Minister Henk Kamp today confirmed at the House of Representatives that some of the in-service FRISC RHIBs will be replaced by new FFIs "Future Fast Interceptors".

There are currently 48 FRISCs (Fast Raiding, Interception and Special Forces Craft) currently in service with the Royal Netherlands Navy (RNLN). They will reach the end of their life in 2024.

According to a Dutch MoD press release published today:

One part [of the in-service FRISCs] is being replaced by 13 FFIs (Future Fast Interceptor), while another part is being modernized. In addition, a number of FRISC vessels for amphibious landings are being replaced in a different way. The intention is that the new vessels and the modernized FRISCs can last at least 10 years.

As Naval News reported previously, The Dutch Defence Materiel Organisation (DMO) started consultation back in January 2020 for the delivery of 26 Future fast interceptors (FFI) for the RNLN, with possibly an option for the procurement of 26 additional vessels for allied nations. It now appears that this number has been reduced by half.

According to the Dutch MoD, the FFI will give the armed forces a major upgrade. For example, the vessel has more range than the FRISC. It is also being investigated whether hybrid drive is possible. This is important to be able to significantly reduce the engine noise. For both the modified FRISC and the FFI, a reduction in the physical load on the crew and passengers is of great importance. To achieve this, better shock-absorbing seats are installed and the FFI is fitted with a shock impact sensor. Furthermore, the FFI has a powerful electro-optic system and a high-speed navigation system. The vessel also offers space for more passengers. The FRISC is limited to 8 passengers on board, while the FFI there will be able to transport 12.

The MoD is currently looking for a supplier for the FFI. It is expected that several suppliers will be able to offer these vessels. The MoD will first extensively test the vessel. This also takes place with a view to the physical load on the passengers.

The FRISCs of the navy and the Marine Corps is divided into three main types: the Boarding Craft, the most powerful Raiding Craft and the Support Craft variant. On the 19 Boarding Crafts, eight are deployed as interception vessels on board the Holland-class offshore patrol vessels (two per ship). Six are used for maritime counter-terrorism (MCT) missions by the antiterrorist unit of the Marine Corps. The remaining five are for special operations (SO) for the Marine Corps’ Maritime Special Operation Forces (MARSOF). The 11 FRISC-MCT and -SO are intended for worldwide specialist amphibious operations.

In addition to the 48 units used by the RNLN, two special FRISCs are deployed by the Royal Netherlands Marechaussee / Customs and two RHICCs (riged hull inflatable command craft) for the Command Force Corps.