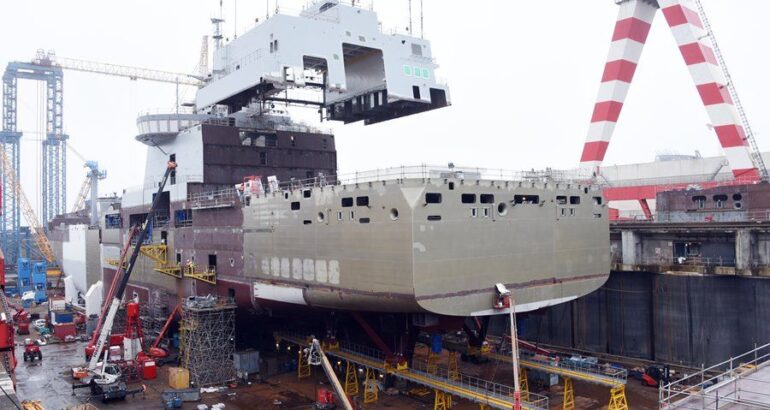 Chantiers de l'Atlantique completed in record time the assembly of the “Jacques Chevallier”, the French shipyard announced on its social media last week. The last block of the first of four new logistic support ships (LSS) known as "BRF" for the French Navy (Marine Nationale) was successfully connected with the rest of the hull at the shipyard in St Nazaire.

By doing so, Chantiers de l’Atlantique just completed an assembly process which started on December 15, 2021 with the arrival of the first section. The assembly of the Jacques Chevallier was then carried out in record time of 50 days, the shipyard said yesterday.

The keel-laying of the “Jacques Chevallier” took place at the Chantiers de l’Atlantique shipyard in late December.

A keel laying ceremony was initially set to take place on 14 December 2021 (two days prior to the keel laying of the first FDI new generation frigate for the French Navy) and Naval News was set to cover the event. However the ceremony was cancelled at the time due to bad weather: The forward section of the ship, which was built in Italy by local shipbuilder Fincantieri, could not be delivered in time. It appears that the keel laying took place on Christmas Eve, with no ceremony, no fanfare and no coverage.

The construction of the first of four new replenishment tankers / supply vessels for the French navy (Marine Nationale) started in May 2020 at the Chantiers de l’Atlantique shipyard in cooperation with Naval Group. The future vessels will be known as the Jacques Chevallier-class.

Chantiers de l’Atlantique and Naval Group were awarded a contract for the construction of four supply vessels in January 2019. The vessels are set to be delivered between the end of 2022 and 2029. It is part of a Franco-Italian program led by OCCAR (Organisation Conjointe de Coopération en matière d’Armement – Organisation for Joint Armament Co-operation), on behalf of the French defense procurement agency (DGA) and its Italian counterpart NAVARM. As such, the design of the French BRF design is based on the Italian Navy LSS (Vulcano-class) designed by Fincantieri.

Safran Electronics & Defense was selected to supply the PASEO XLR extra long-range naval optronic identification & fire control system while to all four vessels of the class, while Vestdavit has won a tender from Chantiers de l’Atlantique to supply the davit systems for the BRFs. The RAPIDFire naval gun system developed by the consortium formed by Thales and Nexter has been chosen as the main artillery and CIWS for the class (two systems per ship). GE is providing the propulsion systems (MV7000 drives) of the vessels.