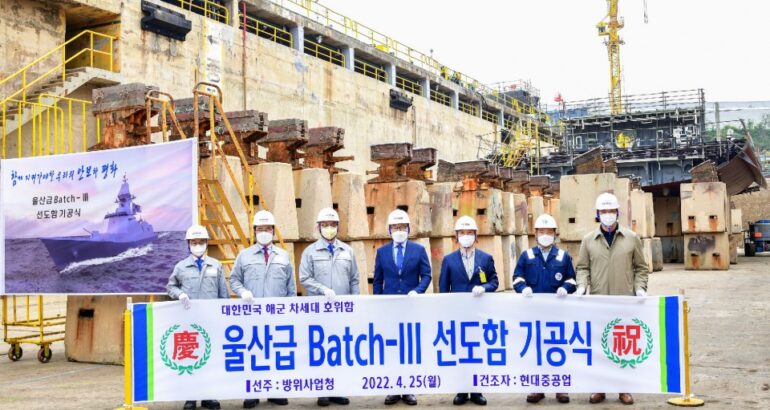 The keel laying ceremony of the first Ulsan-class frigate at HHI shipyard.

South Korea’s Defense Acquisition Program Administration (DAPA) announced that it held the keel laying ceremony for the first ship of the new Ulsan-class of frigates. The FFX Batch III ships are expected to greatly improve the combat capabilities of the Republic of Korea Navy (ROKN).

The ceremony, which was presided over by officials from the ROKN, DAPA, and Hyundai Heavy Industries (HHI), involved laying the first module out of a total of 63 that will eventually be brought together in the construction of the first ship in the batch. It took place on April 25th at HHI’s Ulsan shipyard.

“The Ulsan-class Batch-III uses a multitude of new technologies which improves its detection capabilities and survivability. We expect the ship to boost defense exports, given its world-class multi-function radar and South Korea’s world-leading shipbuilding technology.”

Improvements over previous Ulsan-class ships include an “integrated mast” –which brings together an active-electronically scanned array radar and infrared detection equipment–, a more advanced fire control system, and better air-defense and anti-submarine capabilities.

The Batch III will be 129 m in length, 15 m in width, displace 3,500 tons, and have a maximum speed of 30 knots. Its major armaments include a Mark 45 5-inch main gun, ship-to-ship missiles, and a new close-in weapons system.

Companies that will partake in delivering the ships themselves include HHI and Samkang M&T. Rolls-Royce will deliver the MT30 Gas Turbines, which will serve as the major propulsion system for the ships.