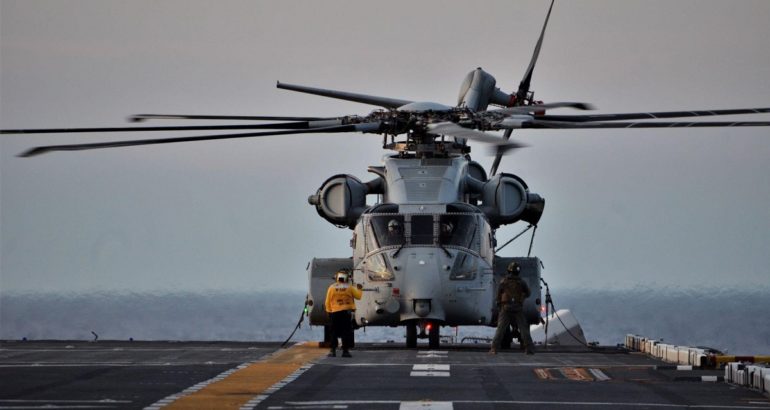 The CH-53K King Stallion prepares to take off from the deck of the USS Wasp (LHD) at sea during its first sea trials. U.S. Navy photo.

In addition to meeting IOC criteria, the CH-53K successfully completed a thorough initial operational test and evaluation period that resulted in over 3,000 mishap free hours flown in various challenging environments and terrain.

The CH-53K is an optimized vertical, heavy lift, sea-based, long range solution for the naval force and will immediately provide nearly three times the lift capability of the CH-53E, with the ability to transport one hundred percent of the vertical Marine Air-Ground Task Force (MAGTF).  Per the Commandant’s Force Design 2030 Annual Update, the CH-53K will complement connectors that will enable littoral maneuver and provide logistical support to a widely disaggregated naval force.

“The success to date of the CH-53K is a reflection of the hard work and effort by the Marines, sailors, and civilians at VMX-1, H-53 Program Office (PMA-261), and Marine Heavy Helicopter Squadron (HMH) 461, and the support we have received over many years from across the Department of the Navy and our industry partners,” said Wise.

The King Stallion boasts an engine that produces 57% more horsepower with 63% fewer parts relative to its predecessor, which translates to an expanded capability to deliver internal and external cargo loads, providing the commander a mobility and sustainment capability the MAGTF has never had before.

The most notable attribute of the King Stallion is its ability to maintain increased performance margins in a degraded aeronautical environment, for example at higher altitudes, hotter climates and carrying up to 27,000 lbs. out to 110 nautical miles; whereas, the CH-53E would be limited to a 9,628-pound external load in the same environment.