The submarine was launched by India’s Defence Secretary AjayKumar. Named after sandfish, a deadly deep water sea predator of the Indian Ocean, the first submarine ‘Vagsheer’ was commissioned in December 1974. It was decommissioned in April 1997.

“INS Vagsheer will now go undergo sea trials and will be later commissioned. The launch of this submarine is an example of India becoming self-reliant”

Four of the six submarines have been commissioned to date: INS Kalvari (December 2017), INS Khanderi (September 2019), INS Karanj (March 2021) and INS Vela (November 2021). Sea trials of the INS Vagir are underway. The final submarine, INS Vagsheer is expected to be delivered to the Indian Navy in March 2024.

Twelve submarines of an indigenous design are envisaged to be constructed in India in this phase with the experience gained and technology absorbed from the construction of submarines under Phase I.

Scorpène is a conventional submarine designed by the Naval Group for the export market. It demonstrates both the Naval Group’s ability to deliver best-in-class submarines and to conduct successful transfers of technology. Today 14 Scorpène submarines are in operational service or being built, for the Chilean Navy (2 units), the Malaysian Navy (2 units), the Indian Navy (6 units), and the Brazilian Navy (4 units). 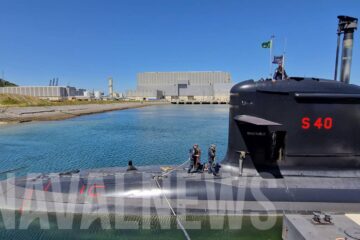 Xavier Vavasseur 02 Sep 2022
Riachuelo, the first of the four Scorpène submarines of the ProSub program, was commissioned by the Brazilian Navy.