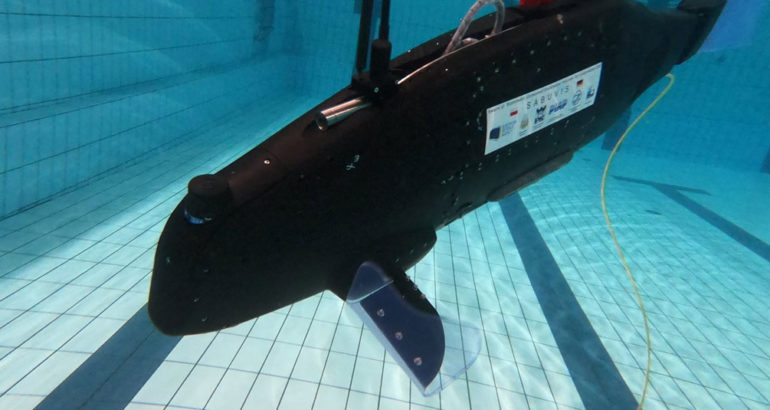 One of the three biomimetic UUVs developed under the SABUVIS I program (Credit: Polish Association of Centers for Technology Transfer)

The European Defence Agency (EDA) Steering Board has just approved the launch of a 4-year CAT B project aimed at developing a swarm of biomimetic underwater vehicles for underwater intelligence, surveillance and reconnaissance (SABUVIS II), the EDA announced on September 27.

The SABUVIS II project builds upon previous collaboration carried out under the SABUVIS I project which was completed in 2019. So far, two Member States (Poland, Germany) are contributing to this new project for which a project arrangement is expected to be signed later next year.

The new project is important for defence as Unmanned Underwater Vehicles (UUVs) are being increasingly utilised for a variety of differing tasks in the maritime environment. They represent a viable alternative to the operation of manned platforms and are particularly well suited to the rigours of an inhospitable domain that places a premium on technical advancements.

Taking the natural world as its template, this collaborative project seeks to replicate some of the key features of marine life, principally those of propulsion and behaviour, so as to ensure the successful completion of underwater operations. A key feature of Intelligence, Surveillance and Reconnaissance missions (ISR) for example, is the necessity to undertake these missions covertly, and those systems that are difficult to detect, both visually and audibly, provide the optimum solution.

This project is a continuation of the successful collaboration enjoyed between Poland, Germany and Portugal in the first SABUVIS project. In this first iteration, three different Biomimetic Underwater Vehicles (BUVs) were constructed with the resulting conclusion that BUVs can be designed with varying degrees of similarity with living organisms. Some of the identified benefits are that undulating propulsion consumes less electrical energy than conventional propulsion systems utilising screw based propellers, and different hydroacoustic signatures are produced with a corresponding lower noise level.

This second phase will now expand upon, and investigate further, the swarm aspects with more tightly cooperating vehicles, moving in formations and consisting of vehicles having specific functions or tasks to perform. The project in particular will focus on the lead vehicles, who are responsible for the navigation function.

The expected advantages of utilising vehicles in a swarm are reliability and efficiency. Firstly, the swarm system can incorporate redundant elements, essentially extra vehicles, which increases reliability in performing a task – the loss of one element does not result in the mission being abandoned. Secondly, the distribution of sensors and devices necessary to perform the mission across a number of vehicles makes it possible to reduce the size and complexity of vehicles and thus ensures simpler construction. Technological areas that the project will also focus on are in the area of navigation and principally in GPS denied areas, optical surface coastal navigation systems and new biomimetic drives.

The principle organisations planned to undertake this project are the Polish Naval Academy and also the Wehrtechnische Dienststelle für Schiffe und Marinewaffen der Bundeswehr, Maritime Technologie und Forschung (WTD 71) in Germany. The project is as a result of the successful cooperation in EDA’s Maritime Capability Technology Group.

US Navy Demonstrates New Launch and Recovery Solutions for LDUUV

Naval News Staff 20 Dec 2022
U.S. Navy demonstrated a new launch and recovery concept for LDUUV with staff from the NUWC and HII in Virginia.