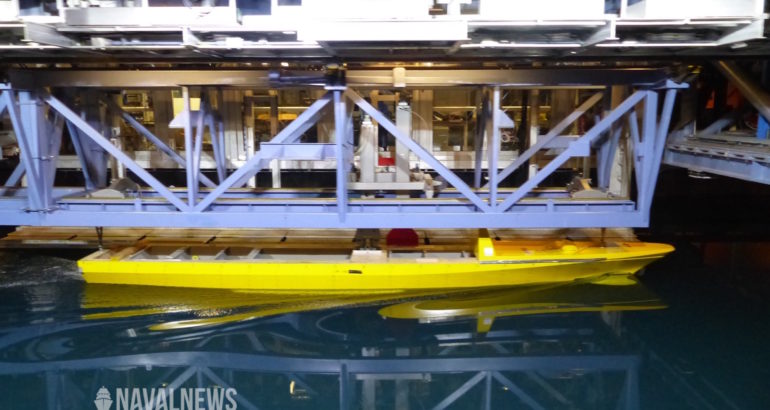 In Part 1 of this article, we introduced the DGA Techniques hydrodynamiques, its missions and the numerous programs it is involved in. In Part 2, you'll discover the impressive facilities used everyday by DGA-TH engineers.

You can read part one of this article here.

There are three main physical testing facilities in the DGA Hydrodynamics at Val-de-Reuil. But the center is much more than a massive testing equipment, as the research made by the DGA-TH are increasingly based on digital simulation, but also on the Franco-British co-operation.

This is the most impressive equipment in Val-de-Reuil. The tank is around 600m long, 15m large and 7m deep. It is the longest in Europe, and one of the most modern in the world, as it was inaugurated in 2004.

It is used to conduct testing of resistance to forward movement either with towed or self-propelled scaled models, in calm or rough sea. B600 is also used to study a vessel’s seaworthiness under high roll or pitch angles.

The B600 can create different kinds of waves and swells, including rogue waves. Depending on the scale of the model, the B600 can simulate waves of up to 30m high. This is used to observe the impact of waves on the vessel’s hull, superstructures and propellers. The results of these tests are scaled using the affinity laws to understand the effects of real waves on full scale ships.

The B600 is equipped with a 120 tons mobile platform that can move at speed of up to 12m/sec, allowing the simulation of the entire range of military speeds (up to 60 knots for small vehicles or submerged weapons). The platform is often used to tow 7 to 8 meters long models, but it is increasingly often used to follow self-propelled models, especially submarines.

The platform is equipped with a full range of surface and underwater cameras and sensors. A team of engineers and technicians is aboard the moving platform in order to conduct the tests and control all the sensors, both on the platform and in the models. Indeed, the carbon-fiber scale models built and used by DGA-TH can be fitted with up to fifty internal sensors.

The wave basin is a 32m by 10m tank used to simulate the swell behavior on a slow moving (or non-moving) surface ship (or submarine at periscope depth). The wave basin can create multiple complex waves, including axial and non-parallel waves, regular or irregular waves, from a single or multiple direction, up to strong rogue waves, named “splash” by the engineers.

The CAH is used to study the sea-keeping qualities of the ships, but also the stability of a vessel before and after a combat damage, for example. It is also of great use for the validation of all slow moving equipment or maneuvers: floating pontoons, buoys, beacons, transshipment, mooring and docking procedures, etc.

During our visit, a 1/21,5 scaled FDI was subjected to a beam swell, and then to several rogue waves.

DGA-TH is equipped with a dedicated facility to study hydro-acoustic discretion and cavitation: a large hydrodynamic tunnel equipped with two test sections.

The test sections are closed, with no air access. They can accommodate a submarine model of the submerged part of a ship’s hull. Most of the time, the GTH is used to test the propellers designed by DGA-TH for the French Navy’s ships and submarines.

The test sections are equipped with several acoustic sensors and high-speed cameras, in order to see the effects of cavitation on the propellers and rudders.

We cannot complete our guided tour of DGA-TH’s facilities without talking about the external facilities in the United Kingdom. For a few years now, France and United Kingdom agreed in sharing their respective hydrodynamics facilities instead of building new massive and expensive equipment. The DE&S (Defence Equipment and Support) can have an access to the unique DGA-TH facilities, while the DGA can use Qinetiq’s Ocean Basin with a rotating arm. A capability present at the previous site near Paris but that was lost when transferring DGA-TH to Val-de-Reuil.

Most of the scale models used in DGA-TH facilities are made at Val-de-Reuil by a team of dedicated technicians and engineers. While wood was still the main component of models in the 1990s, it is now replaced by composite materials for the hull, filled with polyurethane foam around an internal metallic structure.

The models designed and build by the DGA are 3m to 10m long (most of time 7 or 8m long) with a weight of several hundreds of kilograms. Modern fully instrumented models have a modular design allowing to test different rudders, conning towers, propellers configurations, etc.

They include dozens of internal sensors but also miniaturized electric motors and lithium-ion batteries in order to control the propellers and rudders. For example, the self-propelled SNLE3G model displayed during our visit was around 7m long for 500kg. Remotely controlled, it has enough battery for a day long test if necessary.

The modular conception allowed by the composite materials also gives easy access to the internal structure of the model. It is then possible to quickly change the embedded test equipment and sensors. A single composite model designed with moving parts can now replace up to seven wood models designed for a single purpose.

The building of the composite models required a dedicated digital control machine-tool with a robotic arm. In order to get reliable data during the following tests in water, each model must be extremely accurate and stiff. The accuracy of current models is striking, with less than 1.5mm of deviation for an 8 meters long model! Using detailed photogrammetry, those slight deviations will be precisely known and taken into account during the testing phases.

DGA centers around the country are using more and more 3D printing. DGA Thermodynamics is not an exception, additive manufacturing being mainly used for small plastic parts, including propellers. But the DGA-TH is already working on new uses for 3D printing.

Last but not least, the model workshop is also designing and building scale propellers. Indeed, the design of French Navy’s propellers are highly classified, especially for submarines, making it impossible to outsource the manufacturing of these elements.

Those propellers are mostly casting parts of different alloys. But to this day, the finishing treatment is still done by hand, a highly qualified (and one of a kind) employee of DGA-TH being able to achieve an incredible 0,05mm precision due to his unique experience.

During the past 20 years, digital simulation accounted for an increasingly important share of DGA Hydrodynamics activities.

The main purpose of digital simulation at DGA-TH is to establish bridging rules between the testing of scaled models in tanks or tunnels and the expected performances on real ships. It is then a complement to traditional hydrodynamic works.

But digital simulation is increasingly used for new applications, or to replace at lower cost some live testing. The computing capabilities of the cluster have largely increased in the last couple of years, allowing to accurately simulate more aspects of the reality.

It is now possible to realize some tasks only by using simulation, freeing up more time in the water tanks for major programs:

“Without our digital simulation capabilities, we would not have been able to manage simultaneously the FDI frigate program, the Barracuda SSN program and the new SNLE3G SSBN program, as submarines require a large amount of optimization and validation in water.”

For example, digital simulation is now used to find the best submarine’s configuration (depth, speed and attitude) for launching a torpedo or a cruise missile with no risk for the ship, even in the worst conditions.

For the Barracuda program, which led to the all-new Suffren-class, digital simulation brought to light that the initial placement of the CANTO (anti-torpedo decoys) launching tubes in the conning tower of the submarine could led to the injection of the decoys in the submarine’s propeller. Using simulation, it was then possible to modify the geometry of the CANTO decoys and to change the location of the launching tubes.

But digital simulation is also an incredible tool to reduce the development phase of new ships and submarine, allowing the engineers (and the Navy budget) to focus on other problems.

For the development of the Charles de Gaulle aircraft-carrier, half a dozen scaled models were built and tested just in order to choose the best hull configuration. For the next PANG aircraft-carriers, dozens or hundreds of hull configurations will be digitally simulated and tested, and only one scaled model will be built in order to validate in real life the results of the simulation.

Still, digital simulation can’t do everything. For the SNLE3G, more than a hundred of stern and propeller configurations were digitally simulated. But for the hydro-acoustics problematics, some hydrodynamics’ interactions and several structural effects, testing in tanks and tunnels are till mandatory for the propellers, for example.

Digital simulation allows to reduce the risks during development phases. It provides precise expertise at a lower cost. It enables the possibility to cover more major programs in less time, or to increase the level of performance for each program.

But digital simulation is far from replacing the live-testing facilities of DGA-TH. It is a complementary mean for all the engineers in Val-de-Reuil. In the next decade, DGA Techniques hydrodynamiques will continue to support French Navy and export programs such as the Shortfin Barracuda or the SNLE3G, alongside the next French aircraft-carrier.

But it will certainly be involved in co-operation programs such as the European Patrol Corvette that is due to be developed by Naviris, the joint-venture between Naval Group and Fincantieri

In all cases, the up-to-date physical testing facilities and the continuously improving computing cluster of DGA Hydrodynamics will continue to increase the dynamic performances and the acoustic discretion of French ships and submarines, both for domestic and export markets.