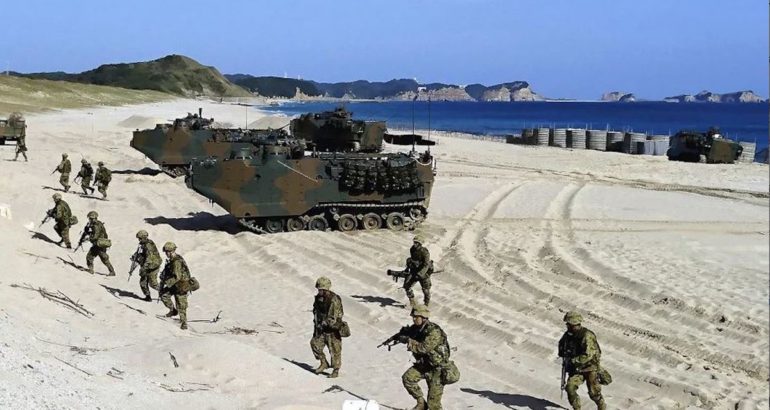 In a move to flex muscles against regional threats, the Japanese Self-Defense Forces (JSDF) are conducting an isolated island recovery exercice from November 14 to 21, 2019.

Landing operations are currently taking place on Tane-gashima Island in the Ōsumi Archipelago (south of Kyūshū); previously, live fire exercises were conducted on the uninhabited island of Okidaitō-jima in the Ryū-Kyū for ships and in Misawa in Aomori prefecture for the air force. Some 1,500 members of the Ground Self-Defense Force (JGSDF), Air Self-Defense Force (JASDF) and Maritime Self-Defense Force (JMSDF) are taking part in the exercise, making it the largest Japanese amphibious training since 1945.

The scenario assumes that the armies of a neighboring country have landed and are occupying an undefended distant island. The three Japanese services must take it back and defend it in a large joint operation. On November 11, JMSDF ships fired against targets on Okidaitō while JASDF fighters struck targets on the Misawa maneuver field, the two sites being supposed to simulate the opposite forces. On the same day, an armed detachment landed on Tanegashima to recognize the terrain and provide intelligence.

On the 13th, minelayer vessels simulated the laying of a minefield in the access channels at Tanegashima to prevent the enemy from carrying reinforcements by sea, while the air force was blockading the island. On the next day, ten AAV-7 vehicles coming from the Ōsumi class JDS Kunisaki tank landing ship performed the initial landing phase. The defense of the island began just after with the laying of obstacles and barbed wire on the main beach while the motorized infantry repelled and contained the enemy. More amphibious maneuvers are planned by November 21 to route other means. Meanwhile, a major electronic warfare and cyber drill is conducted throughout Japan, involving no less than 32,000 military and other state agencies personnel.

The change in threat environment has required the Japanese MoD to focus on the Southwestern island defense, which led to a creation of Amphibious Rapid Deployment Brigade (ARDB). The JGSDF has several new procurement plans in relation to that new brigade such as landing craft and maritime helicopters. It also started some intensive training in both defensive anti-ship missions and more recently, offensive amphibious assault to retake an island as demonstrated this month.