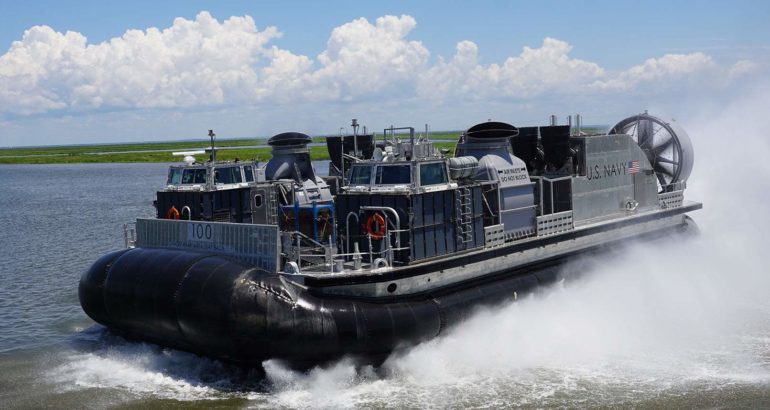 The SSC can travel at a sustained 35 knots. Textron photo.

Textron was awarded a U.S. Navy contract modification, worth around $386 million, for the construction of landing craft, air cushion (LCAC) 100 Class Craft 109 through 123 as part of the Ship-to-Shore Connector (SSC) Program.

The SSC Program is the functional replacement of the existing fleet of LCAC vehicles, which are nearing the end of their service life. It is an air cushion vehicle designed for a 30-year service life. The SSC mission is to land surface assault elements in support of operational maneuver from the sea at over-the-horizon distances while operating from amphibious ships and mobile landing platforms. SSC provides increased performance to handle current and future missions, as well as improvements, which will increase craft availability and reduce total ownership cost. Work is expected to be complete by January 2025.

As the replacement for the existing fleet of Landing Craft, Air Cushion (LCAC) vehicles, follow-on SSCs will primarily transport weapon systems, equipment, cargo, and personnel through tough environmental conditions to the beach. The craft can travel at a sustained 35 knots and shares less than one percent of legacy LCAC original parts, representing a true upgrade for the LCAC forces at ACU 4, ACU 5, and NBU 7. The SSC also has an increased payload and service life of 30 years.

The SSC is constructed at Textron Systems in New Orleans and built with similar configurations, dimensions, and clearances to existing LCAC, ensuring the compatibility of this next-generation air cushion vehicle with existing well deck-equipped amphibious ships, as well as Expeditionary Transfer Dock and Expeditionary Sea Bases.