The PPA Francesco Morosini, second of seven units, is set to be commissioned in March 2022. It is part of the renewal plan of the Italian Navy fleet, approved by the Government and Parliament and started in May 2015 (“Naval Law”).

The Francesco Morosini was due to hit the water at the end of March but Fincantieri had to postpone the launch because of the Coronavirus crisis (during which the company stopped production at all its shipyards). Contacted by Naval News, a Fincantieri spokesperson said at the beginning of the month that the launch was set to take place in June. Regarding the third (Raimondo Montecuccoli) and fourth PPAs, Fincantieri ensured that production is “perfectly on time” and no delay is expected. All production sites re-opened from April 20.

The launching ceremony of the first the Multipurpose Offshore Patrol Ship (PPA) “Paolo Thaon di Revel” took place on June 15 2019 at Fincantieri’s shipyard in Muggiano (La Spezia). The first ship-in-class started sea trials on November 19. 2019.It is set to be commissioned in 2021 with the Italian Navy next year.

Xavier Vavasseur 23 Sep 2021
The Italian Navy released the first cleared photos of the bridge of its latest class of surface combatant, the Multipurpose Offshore Patrol ship (PPA), and it looks like something out of a sci-fi movie. 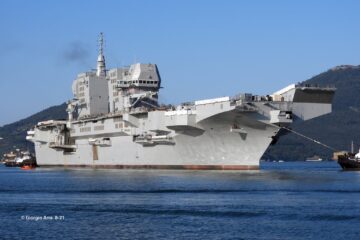 Luca Peruzzi 31 Jul 2021
The Italian navy (Marina Militare) has received today the first F-35B fighter being deployed on board the Cavour aircraft carrier, which this year received the certification to operate with fifth generation aircraft in the US.