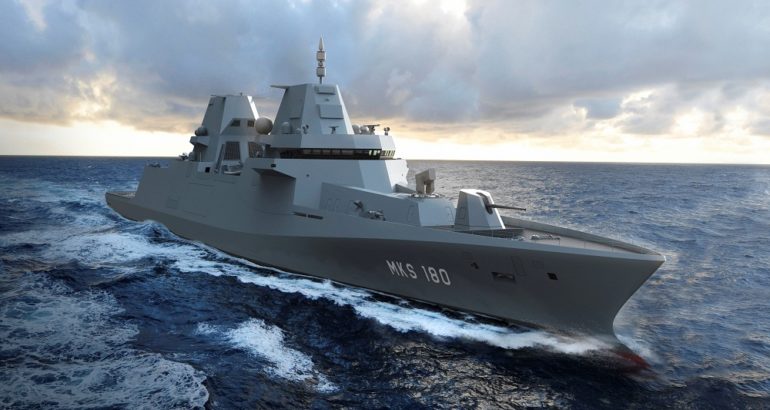 The MKS 180 Multi-Purpose Combat Ship Program of the German Navy (Deutsche Marine) is back on track following an official announcement by German Federal Minister of Defence, Annegret Kramp-Karrenbauer.

The German Ministry of Defense (Bundesministerium der Verteidigung) announced this morning that the public procurement tribunal has ended the review procedure on the MKS 180 program, clearing the way for parliamentary approval this summer and a subsequent contract award in 2020:

“I am very pleased that the award procedure for the Mehrzveckkampschiff 180 can now continue! I will be asking Parliament to approve the budget before the summer recess and I am very optimistic that we will then be able to conclude a contract for the MKS180 this year.”

For the record, the Federal Office of Bundeswehr Equipment, Information Technology and In-Service Support (BAAINBw) announced on January 14th that Dutch shipyard Damen Schelde Naval Shipbuilding B.V. won the MKS 180 Multi-Purpose Combat Ship tender. Damen is partnering with Blohm+Voss and Thales to supply the German Navy with at least four MKS 180 frigates. However, GERMAN NAVAL YARDS Kiel (GNYK), who was competing in the tender, submitted a formal complaint on January 24th. It appears that the announcement this week of a long-term cooperation agreement in naval shipbuilding between Lürssen and GNYK resolved all issues and the MKS 180 program is now back on track.

We are pleased with the consolidation of the German shipping industry under the leadership of the Bremer Lürssen Group. After all, Lürssen, like Damen, is a family-owned private shipbuilding company in Northern Europe.

We look forward to intensive cooperation in the future. As Damen, we see this consolidation as a positive development. As a result, naval construction in Germany is moving towards the same structure as in the Netherlands, with private companies such as Damen as an ‘Original equipment manufacturer’ (OEM), together with a chain of suppliers, designing and building high-quality and innovative naval vessels, along with the Ministry of Defence.

All the advantages that the German government and other stakeholders see for themselves here are already present for the government in the Netherlands. This consolidation also increases the chance of equal cooperation between Northern European countries in the field of naval construction. A development that we can only applaud, in an otherwise unevenly distributed European playing field.

The German MoD has now officially confirmed that German Naval Yards withdrew their request to review the contract and that Damen Schelde Naval Shipbuilding is now officially the winner of the tender for the construction of the ships.