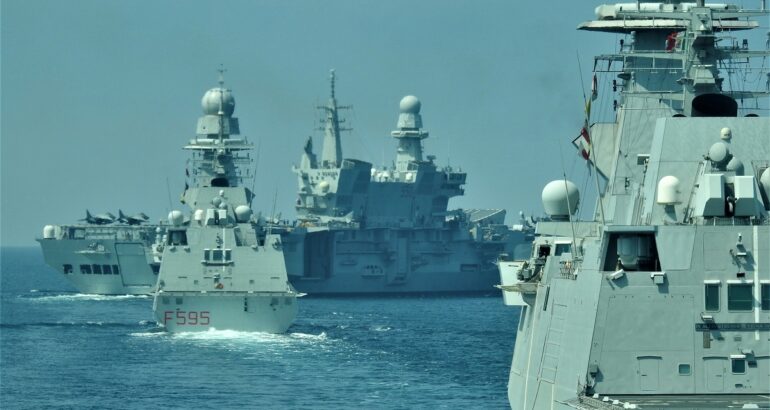 “To satisfy the national defense’s man power and capabilities ‘minimum’ requirements, the Ministry of Defense and the Navy are working on a front-line fleet composition by 2034 centered on the Cavour short take-off and vertical landing (STOVL) aircraft carrier with fifth-generation F-35B aircraft and helicopters, four air-defense destroyers, 10 FREMM frigates, 15 combatant patrol vessels, including seven PPA, and eight new patrol vessels in addition to eight submarines including four U212As and four new-generation U212 NFSs (Near Future Submarine). We are also planning to have a logistic support component of three new ships based on the Vulcano-class platforms as well as the procurement of three new amphibious vessels to replace the Santi-classes of LPDs (Landing Platform Dock) and twelve new generation multi-purpose mine countermeasures platforms to substitute the current Lerici/Gaeta-class units. The renewal plans are also involving the support fleet with the new special and diving operations – submarine rescue ship (SDO-SuRS) and new oceanographic/hydrographic vessels component”

“Cavour has recently completed an updated program to integrate and operate the F-35B. Notwithstanding the pandemic and the national program’s delivery delays, my ambitious goal is to complete the transition from the AV-8B+ to the F-35B in the shortest timeframe,” he added, indicating an initial operational capability in 2024.

The DDP 2020-22 document includes the launch of de-risking studies for two next generation destroyers under the DDX program to replace the Navy’s two Admiral-class destroyers for a foreseen delivery date, funding permitting,  by 2028. Initial released configuration details provides for a 10,000 tons platform with a combat system based on combat management system and sensors evolved from PPA/LHD programs, air-defense MBDA Aster 30 family of missiles including Block 1NT developments and under-consideration future deep-strike weapon system in addition to Teseo Mk2/E anti-ship/land-attack munition. In the meantime, with the award of the feasibility study to the Naviris joint-venture between Fincantieri and Naval Group, Italian and French MoDs have launched the preliminary activities for the Horizon-type destroyers mid-life update program to extend the lifetime and enhance combat capabilities towards ballistic missile defense (BMD).

The Italian Navy will maintains a fleet of 10 FREMMs, although the conclusion of the procurement program under OCCAR agency management is planned to be pushed right in order to have two new Bergamini-class frigates to replace the same-number vessels under transfer plans to Egypt. Moreover, the component of seven PPAs under procurement and delivery offers the growth capability to upgrade less capable (PPA) Light and Light Plus configured platforms to enhanced or PPA Full configurations. The latter include a combat system based on the dual-band four-fixed faces radar (DBR)/EW suite and full weapon suite with AAW and ASuW missiles. No plans have however so far announced for PPA developments.

The Italian Navy and the MoD’s directorate of naval armaments (NAVARM) are currently on the verge of launching the U212 NFS (Near Future Submarine) development and procurement program for 2+2 new generation air-independent propulsion submarines with a large national industry’s content and a candidate for OCCAR management. Conceived to maintain advanced capabilities in the underwater domain with a renewed national R&D and industrial cluster participation, the NFS program sees the procurement contract award for two boats plus option for additional two boats in addition to training, in-service and logistic support to be awarded by year-end.

Speaking about the program in ‘Italy is the sea’ webinar by Limes’ Italian geopolitical review, the Chief of Navy highlighted the need for a credible deep strike capability to be provided to the submarines (and the surface ship as already illustrated), which is under defense review. The DPP 2020-22 include a long-term unfunded and unspecified service-provided ‘Deep Strike New Generation’.

On the near-medium term, the Italian Navy is looking to launch the renewal of its OPV fleet with the procurement of 8 new ships under the PESCO’s European Patrol Corvette program, where Italy is the coordinating nation with France, Spain and Greece, and involving Naviris, the joint-venture between Fincantieri and Naval Group, and Navantia.

The Chief of Italian Navy also unveiled plans to fund under the DPP 2020-22 planning document the procurement of an additional Vulcano-class Logistic Support Ship, which first-of-class is to be delivered in early 2021.

In addition to the new Trieste landing helicopter dock (LHD), which is due for delivery in 2022, the service is currently finalizing the requirements for a new class of three amphibious vessels to replace the current Santi-classes of landing platform dock (LPD) vessels, he continued. Funding are included in the DPP 2020-22 for initial studies on a new component of 12 ocean-going multi-purpose mine countermeasures (MCM) vessels capable to operate unmanned vehicles.

The Italian MoD’s Directorate of Naval Armaments is also expected to launch later this year/beginning of 2021 the procurement program for a new special and diving operations – submarine rescue ship (SDO-SuRS) to replace the aging Anteo ship together with a new generation completely deployable submarine rescue system to be developed by national industry. The program also includes a hyperbaric dual-use centre, while a smaller support platform is being studied by Italian Navy for supporting the COMSUBIN dive and special forces command in multi-purpose dual-use operations, namely ordnances search and neutralization.

The Chief of navy also highlighted the multi-year procurement program from 2021 for the new Major Oceanographic Major Vessel (NIOM) and two Coastal Hydro-Oceanographic vessels (NIOC) to replace the navy’s Magnaghi– and Ninfe-class vessels that support the navy’s Hydrographic Institute. NIOM will have capabilities to operate worldwide, as required by the current and foreseen research campaigns in the Artic region. The DDP 2020-22 also includes initial funding to replace the aging naval bases support vessels fleet.

“We also launched initial studies on a new hospital ship based on the lessons learned during the pandemic as well as the humanitarian operations experiences”, he unveiled looking to a joint-Ministries program and a flexible platform with deployable medical equipment ashore.

The Chief of Navy also confirmed the contract award by year-end for the development phase of the new Teseo Mk”/E long-range anti-ship/littoral attack missile procurement programme as well as the life-extension of current inventory of Teseo Mk2/A munitions.

It also unveils initial funding for the full-rate procurement of the fully-certified 127 mm Vulcano ammunitions, the only family of long-range naval guided ammunitions already available and capable to engage both sea and land targets, as well as highlights the development program for the CAMM ER air defense missile, currently involving only the Italian Air Force and Army, but the natural candidate for Aster 15 replacement.