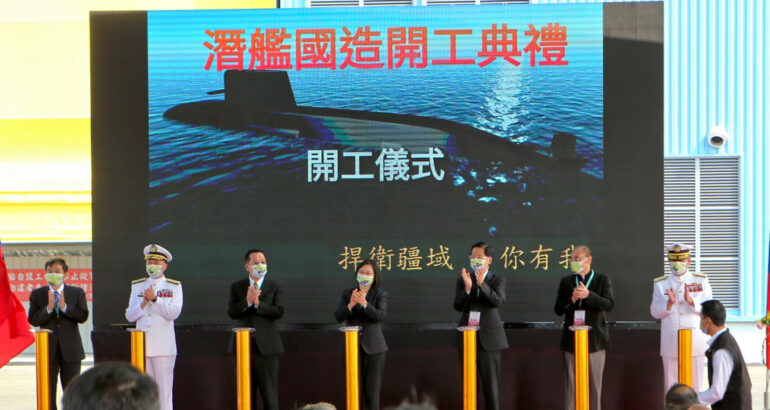 Taiwan' shipbuilder China Shipbuilding Corporation (CSBC) started construction today on a prototype submarine known as the Indigenous Defense Submarine (IDS). The move aims at renewing the submarine forces of the Republic of China (ROC) Navy while developing a domestic capability to produce submarines.

The submarine game in East Asia is heating up, with multiple new submarines being constructed. Japan recently launched the first of the new Taigei-class. South Korea launched the second KSS-III class boat, and there is evidence that China is building new nuclear submarines. Not to be left behind, Taiwan is moving forward with its first indigenous submarine design. A brand new shipyard was set up in Kaohsiung (Southern Taiwan) for this ambitious program.

Senior military officers told local media that the prototype submarine will be fitted with ‘high-efficiency batteries developed and produced by domestic manufacturers” instead of an Air Independent Propulsion (AIP) system. This most likely refers to the use of Lithium Ion battery technology.

“The weight and volume are lighter and smaller than the traditional battery. The battery kinetic energy and battery life are far better than traditional batteries. The general stated that this domestically-made high-efficiency battery has been certified by a well-known international shipping company and will be installed on the prototype national-built submarine. Follow-up ships of the national-built submarine program will also follow this path, and all of them will be fitted with domestically-made high-efficiency batteries. […] AIP systems are subject to export control in all countries that produce them and their acquisition cost is very expensive. Taiwanese submarines will use high-efficiency batteries produced in Taiwan, because the overall benefit is higher than purchasing AIP systems abroad”.

The new design appears to be based on the Dutch design heritage, which makes sense as Taiwan operates two Dutch designed boats. The fitting of new battery technologies, probably lithium-ion, will put the design into the upper tier of non-nuclear submarines. Other countries are also building submarines with these battery technologies, notably Japan, South Korea and Italy. Navies have been slow to adopt lithium-ion batteries for submarines due to safety concerns, They are too prone to fire. Countries which are pushing ahead with this technology however believe that they have solved this problem. For Taiwan, coming in fresh, this may be a fresh challenge however.

The ROC Navy has two ageing Chien Lung-class submarines built in the Netherlands in the 1980ies as well as two “vintage” Hai Shih-class (former U.S. Navy Tench-class SSKs transfered to Taiwan in 1973).

Prior to their transfer to the ROC Navy, the United States sealed up the 10 torpedo tubes ( six forward and four aft ) of the submarines. Rumor has it however that the torpedo tubes were reactivated a long time ago.

The Chien Lung-class is currently fitted with German-made AEG SUT 264 heavyweight torpedoes. Decision to replace the German torpedoes by American ones was made back in 2011. Nine years later, it looks like the deal will finally go through: The United States’ State Department approved a possible Foreign Military Sale (FMS) to Taiwan of eighteen MK 48 Mod6 Advanced Technology (AT) Heavyweight Torpedoes (HWT) back in May this year.

Given the age of both classes of submarines (which will almost certainly require some upgrade work, at least in their combat management systems), the MK 48 will likely be intended for Taiwan’s future submarine class which is set to be delivered in just five years (as seemingly “confirmed” by local naval officers).