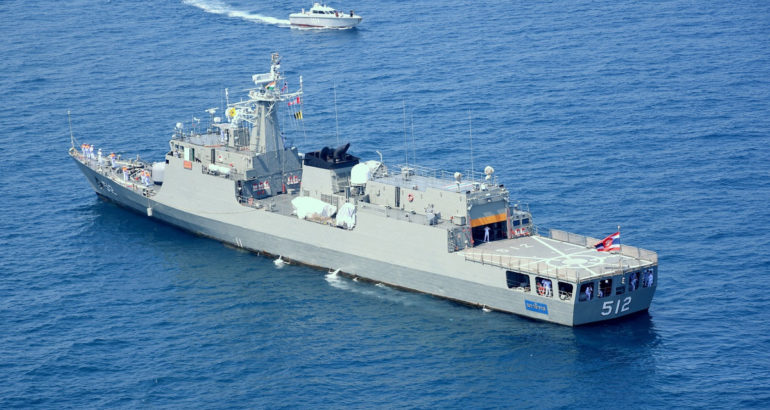 HTMS Narathiwat of the Royal Thai Navy. The 96 meters corvette for Algeria is likely based on the same design. Indian Navy picture.

Lloyd’s Register (LR) has been selected to provide assurance and certification services to Hudong-Zhonghua Shipbuilding Group (HZ) for two significant naval projects with the Algerian Naval Force and the Royal Thai Navy.

The Algerian Naval Force project, consisting of a 96-metre Corvette will be designed and constructed to LR’s Naval Ship Rules. The Corvette is designed for operations including patrol, escort and protection of maritime interests within the nation’s Exclusive Economic Zone. The Corvette incorporates a helipad and a crew of 78 people, has a range of 3,500 nautical miles and is capable of top speeds in excess of 27 knots. It is scheduled for delivery in 2022.

The second project, a 210-metre Landing Platform Dock (LPD) ship for the Royal Thai Navy, can carry up to 800 marines and 20 amphibious vehicles, and has a well-deck that can deploy up to four Landing Craft Air Cushion (LCAC) vehicles – or hovercrafts – of approximately 150 tonnes each. The ship is also fitted with two large hangars that can carry up to four helicopters and a flight deck that can operate two helicopters. The expected delivery date of the LPD ship is 2023.

In addition to its more traditional role in military amphibious operations, the Royal Thai Navy will also use the LPD ship for humanitarian assistance and disaster relief missions. The ship is an export variant of LPDs currently in service with the Chinese People’s Liberation Army (PLA) Navy, which are also being built at HZ. LR will provide design and construction certification services to HZ in accordance with LR’s Naval Ship Rules.

“Being selected to collaborate on these naval vessels is testament to our longstanding relationship with Hudong-Zhonghua and both navies. We successfully completed work on two 95 m Offshore Patrol Vessels (OPV) for the Thai Navy between 2003-2006 and supported the construction of three 28,000 tonne Corvettes for the Algerian Navy between 2013 and 2016”

“We are delighted to have been chosen by Hudong-Zhonghua to support them in these two very different projects, demonstrating LR’s ability to provide flexible, tailored naval assurance and certification services that support our clients in the best manner possible. This also attests to the strong relationship between the two companies, as well as the mutual desire to expand the considerable experience in naval shipbuilding the partnership will bring to navies around the world.”

Thailand signed a contract with China for the procurement of a Type 071E landing platform dock (LPD) on September 9, 2019. China State Shipbuilding Corporation (CSSC) is contracted to build the amphibious vessel for the Royal Thai Navy. Originally designed after the 1996 Taiwan Strait crisis, the Type 071 is 210 meters long and 28 meters wide. It is capable of carrying an 800 marines (1 battalion) and some 20 amphibious vehicles. Three ships of this class were put in service between 2007 and 2012, all assigned to the PLAN South Sea Fleet. A second batch of five more Type 071 LPDs were added to the order book during the 12th five-year plan (2011-2015).

The deal with Thailand was reported to cost only Bt6.1 billion (200 million USD). Thailand previously ordered a single S26T diesel electric submarine (SSK) from China’s shipbuilding industry as part of a government-to-government contract signed in 2017. The first steel cut for the first submarine took place on September 5, 2019. However, because of the pandemic, Thailand had to put the submarine order on hold a couple month ago to fund coronavirus fight.

While the exact type of corvette for Algeria has not been disclosed, it will likely be similar to the Pattani-class of the Royal Thai Navy or the Centenary-class of the Nigerian Navy because they share the same length: About 96 meters. Under a May 2002 agreement, the China State Shipbuilding Corporation (CSTC) built the HTMS Pattani and her sister ship HTMS Naratiwat at the Hudong-Zhonghua Shipyard in Shanghai. NNS Centenary was built at Wuchang Shipyard in Wuhan, by China Shipbuilding and Offshore Industry Limited (CSOIL) and delivered in 2014. According to the Nigerian Navy, Centenary (F91) has a length of 95.5m, breadth of 12.2m and draught of 3.8m. She is designed to have a maximum speed of 20kn, a range of 3000nm at cruising speed of 16kn. Her full load displacement is about 2100 tons. She has one sister ship: NNS Unity (F92). The Centenary-class vessels are classified as OPVs in the Nigerian Navy.

The Algerian Navy previously procured three Adhafer-class corvettes from CSSC and built at the same shipyard: Hudong–Zhonghua Shipbuilding. The first unit was launched on 15 August 2014 and commissioned in November 2015. The second and third were both commissioned in 2016. This class is larger, with a length of 120 meters.