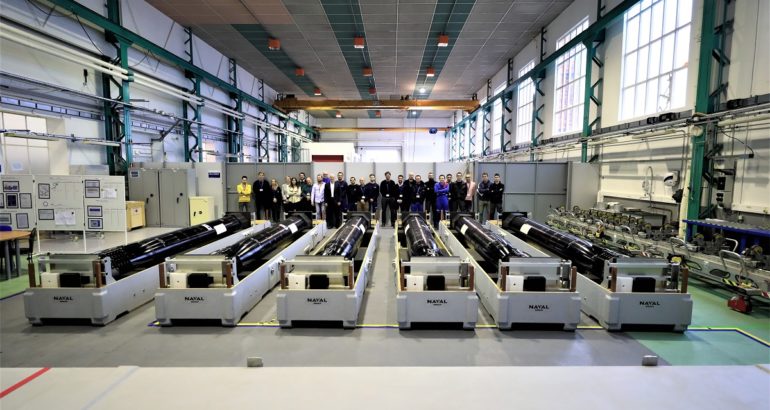 Delivery ceremony of the first batch of (6) F21 heavyweight torpedoes for the French Navy in November 2019, at the Naval Group torpedo factory in St Tropez.

Naval Group delivered the first batches of F21 new generation heavyweight torpedoes to the French Navy (Marine Nationale) as well as to the Brazilian Navy (Marinha do Brasil).

The announcement was made during the company’s annual earnings press conference on February 21, 2020.

In the French Navy, the F21 is set to replace the ageing F17 Mod. 2 torpedoes. The F21 will be fitted aboard the existing Le Triomphant-class SSBN fleet, the new Barracuda type (Suffren-class) SSN and down the road, the future SSBN fleet known as “SNLE 3G”. A number of current Rubis-class SSN will be deployed with the new torpedo as well, as at least one submarine of the class was used to perform validation and qualification tests of the F21 in past years. The French Navy initial requirement is for 93 F21 heavyweight torpedoes which will be known as “Artémis” in the service.

Naval Group is also looking to supply its F21 heavyweight torpedo to the Hellenic Navy, which has a requirement to equip its fleet of four Type 214 and one Type 209 submarines. The need is for 36x 21-inch (533 mm) heavyweight torpedoes to replace the ageing SUT Mod0 and SST-4. An international tender should be released by the Greek MOD this year.

There is also a heavyweight torpedo requirement in India, for the six Scorpene-class submarines of the Indian Navy. India’s Defence Ministry has issued a tender in June 2019 for the procurement of about 100 heavyweight torpedoes.

According to Naval Group, the F21 features exceptional performances, fulfilling the stringent French Navy requirements: advanced self-guided mode, shallow and confined water capability, latest generation of countermeasures resistance and compliance with nuclear submarines safety norms. Thanks to its intelligence, range and firepower, it offers navies an unrivaled tactical advantage by increasing the spectrum of operational scenarios.

The torpedo is wire-guided initially and then uses acoustic homing. Its electric motor is driven by an aluminum silver-oxide (AgO-Al) battery. The back end of the torpedo is provided by Atlas Elektronik (and is said to come from the SeaHake mod4) which allowed French engineers from the DGA and Naval Group to fully focus their time and budget during the research and development phase on the intelligence, guidance and tracking features of the F21.